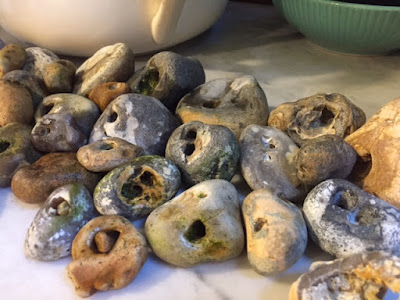 When I was a child, finding a pebble on the beach with a hole right through it was a very rare and special event. I didn't know then that hagstones, or witch stones, or adder stones - or one of many other names - were believed to have magical powers. Just finding one was exciting enough.

For years I idly puzzled over what could bore a hole through the hardest stone - for hagstones are usually flint, renowned and used over millennia for its hardness. And that, it turns out, is the secret. The hole in a hagstone has its origin in the stone's formation over millions of years. Flint is formed in chalk, as silica gradually - grain by grain, molecule by molecule - replaces the calcium carbonate through a chemical reaction. This is why flint is most common along the chalky south coast. As the chalk wears or is washed away, the flints are released, and in many cases fall into the sea to be worn and smoothed into pebbles. In some flints, before they became flint, there would have been a fossil, or something other than chalk, which instead of turning into flint would form a softer stone. While the action of the sea would only very slowly rub the corners off the hard flint, this softer stone would eventually be worn and washed away, leaving the hole.

All the time I lived in Newhaven, we rarely visited the stoney beach, preferring instead the enclosed and sandy West Beach until it was preremptorily closed. But going back now, and walking the dogs at Tidemills and on the beach to the east (which has sand at low tide) we encounter a lot of pebbles. South coast, flinty, pebbles.

And, once you get your eye in, hagstones aren't that rare. I now aim to find at least one on each visit.

As a result, I now have forty-five. I put them out in the garden last summer, in the old stone sink, but this morning I brought them in, gave them a rinse, and laid them out on the washstand in the dining room. 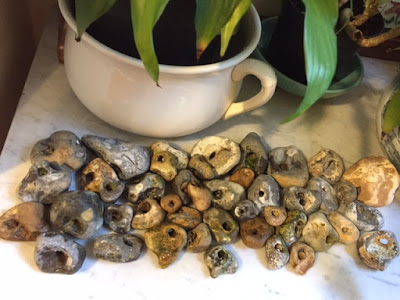 This was partly in recognition that they are - notwithstanding their relative abundance in Newhaven - rather special, and also to bring a little bit of seaside into the house deep in an inland winter.

I might also have knotted them onto a cord in various ways to hang outside the door, to keep away witches and evil spirits. Or I could protect the house by attaching a hagstone to my keyring (although I find a bottle opener more useful). I could hang one around my neck to fend off impish tricks. Perhaps my bathroom is particularly protected, as I have long had a hagstone as the pull on the end of the light switch cord.

In a couple of my stones, a little bit of shingle has got wedged immoveably within the hole. 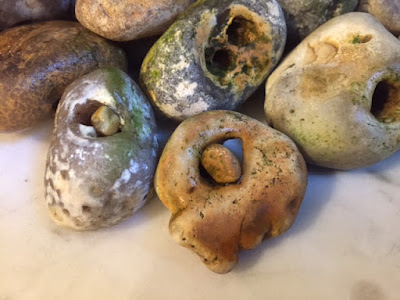 Now they are indoors, I can get to know them better. We may not believe in their magic as such, but they are a constant source of wonder, and have the power to transport me back to the seaside, which is magic enough.