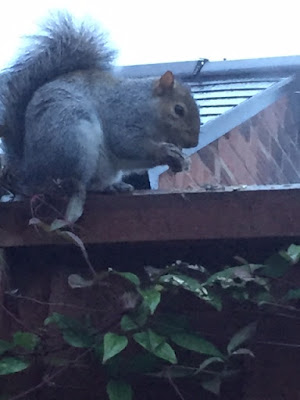 Many years ago, in my first or second year of teaching, at Sussex, I had a student who was French (those were the days). One day he was late for a seminar, and and the gist of his apology was:

''Zere was a squirle in my room. I say to 'im, Meester Squirle, you must leave now. But 'e 'ide under ze bed'

Thus for the past twenty years, members of the species Sciurus carolinensis have been known as squirles. At Sussex they were very tame, and would take nuts from your hand.

As a child - I have no idea what age, about thirteen or so - I 'rescued' or otherwise acquired a young squirle, and kept it in my room for a bit before releasing it back into the trees at the bottom of the garden. This is how I know that squirles have fleas the potency and malignancy of which puts those of cats and dogs in the shade. And we also had about nine cats at this time, so I know whereof I speak. Come to think of it, I think that was how Che (for that was the squirle's very temporary and slightly onomatopoeic name) came to be in the house and needing rescuing in the first place.

About this time last year I hung a bird feeder on the clematis wire outside the dining room window, with fat balls in it. No birds ever visited. The fat balls went rancid and mouldy. I was, therefore, very surprised before Christmas to find scatterings of fat and husks on the ground beneath it, and the contents gone. I replaces them, with fat balls that were not mouldy, but probably every bit as rancid, and, as I had half expected, my customer was not a bird, but a squirle. The photo shows it having retired to the fence to finish some particularly tasty seed. The new balls were gone within a day - but an awful mess left on the ground. So I put some nuts out on the wondow sill instead - but somehow the squirle hasn't worked that out yet.