Sitting down is apparently really bad for you - that's the (second) latest thing, anyway. And I do a hell of a lot of it. I don't even have my two miles walk to the office and back now to salve my conscience and stretch my legs. I can stand at my desk, 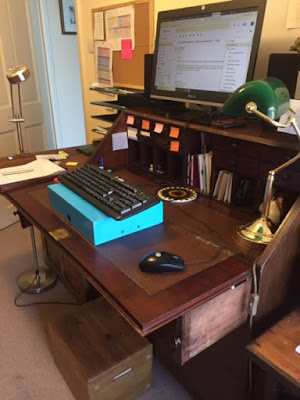 but more often than not, I don't.

However, all is not lost. I seem to have established a tradition of making myself pancakes for Sunday brunch. And pancakes - unless you have someone else cooking them for you - have to be eaten standing up.

My galley-type kitchen (almost exactly the same dimensions as the one on Bakewell) is perfectly suited for this.

First, I prepare everything by laying out plate, caster sugar and lemon (the only thing I ever have on actual (as opposed to Scotch) pancakes) cup of tea, book and glasses on the counter opposite the hob. 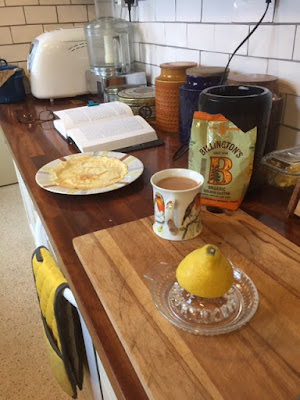 Then on the other side is the batter, oil, pan and spatula... 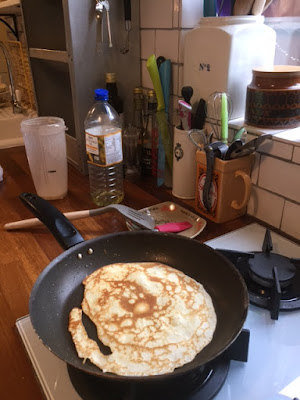 So it's a case of cook the first pancake, get it onto the plate, oil the pan, get the next one on, juice and sugar the one on the plate, glasses on (so they don't get sticky doing it later), roll it up and eat it while reading a paragraph and keeping an eye on the next one.

I work on the basis although this feels terribly decadent (especially as growing up, pancakes were most definitely a once-a-year treat), the egg and quarter pint of milk, two ounces of flour and a drop of oil actually probably compares quite favourably in terms of protein:carbohydrate:fat ratio to having the egg on toast (which would be horrible anyway). So that's all right then.
Posted by Sarah at 18:54 2 comments:

... subject to post about, I thought of my most recent Oxfam purchase. 'Most recent' meaning, in this instance, on March 21st (the day I last got my hair cut and last handled cash).

But what a fabulous purchase it was: 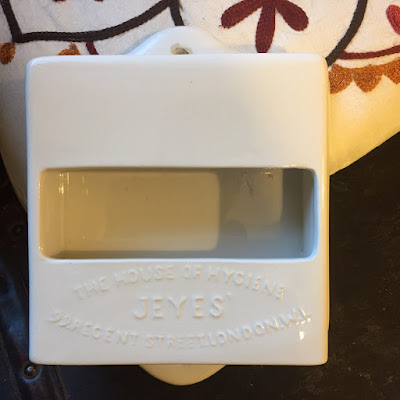 In absolutely perfect condition, a ceramic holder for those boxes of interleaved toilet paper, which - hooray! - I see are still sold. On the front is embossed 'JEYES - THE HOUSE OF HYGIENE' and their address at 99 Regent Street. 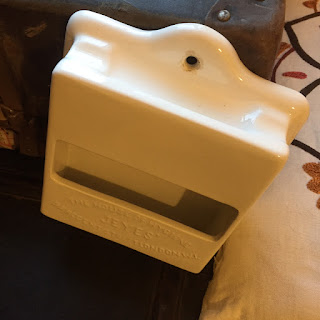 Clearly designed in the interests of employers for the efficient multi-tasking use of workers' break times.