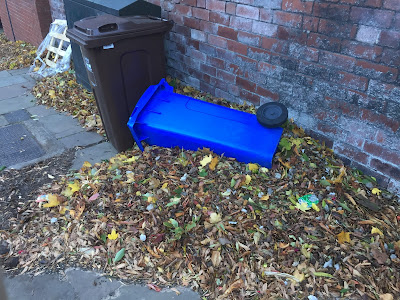 Right, let's see if I can remember how to work this blog thing.  What happened, you may well ask. To which I reply, what usyually happens around this time of year, viz. Semester 1.

However, I can keep silent no longer, for I have been inspired by Starcross Jim to write about my latest rail compensation claim. This gives me the opportunity to compare various train companies' web-based processes. You may recall that I successfully (albeit grudgingly) received a refund for my severely delayed journey from Rugby from some shady fly-by-night outfit called 'Northwestern Trains' who appear to have nicked a load of London Midland rolling stock and stuck some cheap stickers on it. I mean to say, Rugby is nowhere near the North West! That delay was weather-related (overheating rails - I was coming back from Braunston at the end of June), as was my latest, not-so-significant, delay.

Last Monday I went to a conference, which was held in Brighton, so naturally I took advantage of this to spend a weekend in Newhaven, and took advantage of the Newhaven pad to not pay (or not get work to pay) for a hotel. Simon-at-work had booked me a super off-peak return to Brighton and I had a reservation on the 1729, so I dashed away straight from work on Friday night after a busy week, to get to the station knackered and with a headache, to see that the 1729 had been cancelled, owing to having hit a tree on the track at Long Eaton (it was very windy, if you recall - well, it was up here, anyway). This sounded to me as if it might be a longwinded (forgive the pun) thing, and as I was already due to arrive in Newhaven at 2212, I was half tempted to go home and try again in the morning. So I went to the ticket office (because the information desk was closed) and asked if I would be able to use the ticket the next day. Absolutely not, he said. If I wanted - or even had to - to travel the next day because of the delay, I would have to buy a new ticket and then apply for a refund on the old one. What, I asked him, if I didn't have the wherewithal to buy two tickets at £105.20 each? He neither knew nor cared, which is a shame, because generally speaking, I quite like East Midlands Trains. Anyway, as it happened, the 1800 was running normally. Sussing that it was likely to be rather crowded, and finding it in the platform but not yet with the doors open, I edged my way into a position by the doors (while everyone else stood docilely behind the yellow line), ready to  grab one of the unreserved seats at the end of the carriage. Success! Because the cancelled train was the 1729, and the next one the 1800, I reckoned that my journey had been delayed by more than that crucial 30 minutes. In fact it was 35, because I should have got the 2000 Thameslink, but ended up getting the 2035

So when I got back, I went to the East Midlands Trains website to fill in a claim. It was very simple, and I didn't need my ticket (which was just as well, as it was consumed by the gate at Brighton) but only my booking reference. The form was perhaps rather too simple though, and I ended up only putting my Sheffield - St Pancras journey, so I'm not sure what they'll make of that. I've just checked and they haven't emailed me. I'll keep you posted as to what if anything ensues. As I didn't pay for the ticket in the first place any refund will be a bonus (although it was me that put up with the delay, so I guess any compensation is rightfully mine. And I did, naturally, have to purchase a packet of pains au chocolat to cheer myself up.)

Interestingly, my return journey was routed via Bedford - apparently the only direct Bedford - Sheffield train, certainly of the evening, at 1943. I thought this was a clever ruse to avoid leaving St Pancras outside the super off-peak period (i.e. before 1900), but in fact this train got to St Pancras at 1851, perfect (barring wrong turnings) for the 1901, although I suspect that would be too fast a turnaround to be a suggested route. Given that the only restriction on my ticket was that I go via City Thameslink (I'm guessing that's a proxy for Thameslink) I decided that if there was a cock-up, I'd rather be stuck at St Pancras, with direct trains every half hour, than in Bedford, where I have never been, and there were no other direct trains - so I decided to give Bedford a miss I'm afraid, and got home ahead of schedule.

Back in the days when I used to go to Huddersfield, Thameslink trains were the most horrible, manky trains you ever encountered. Now they have fabulously new swish modern things that are open all the way through, and whenever I travel on them, nearly empty.