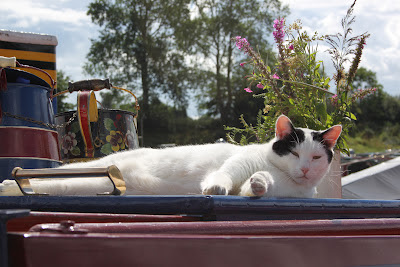 OK, I won't give it up then. It's just got a little boring lately, what with the restoration pretty much complete - there's only so many things to talk about and I would hate to be writing one of those boring blogs.

But I shall soldier on. Recently we've been to Stourport with Warrior (and Adrian and Linda) and more recently still, to the second historic boat gathering at Alvecote on the Coventry Canal (not my favourite waterway).

I have uploaded a few photos here (currently in reverse order but I'm working on that); more words to follow as and when I get my act together.
Posted by Sarah at 19:43 5 comments:

Now this is embarassing.

That lovely length of fire hose which now adorns Chertsey's cratch was a present. From someone. And I can't remember who.

I am so sorry to appear so ungrateful. I'm not, really - it's a fabulous bit of hose, and I really want to say thank you.

I was finding it a bit cramped working on a small table, plus I don't really get on with the laptop all that well, so having worked out that Bakewell is rather more spacious than we originally anticipated, when we went back to Newhaven the other week I fetched back my old (and it is old - 2005) desktop computer, monitor, keyboard etc.

All I needed was a desktop to put it on. A trip to Kelsall's for a length of worktop and a bit of batten soon sorted that out. 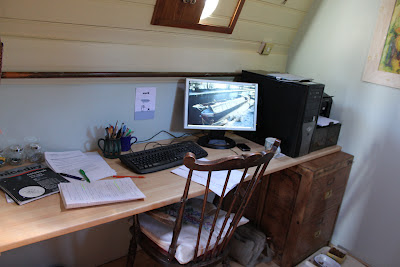 And now we have a dining table as well, so I can read and eat my muesli in comfort without spilling it all down me. 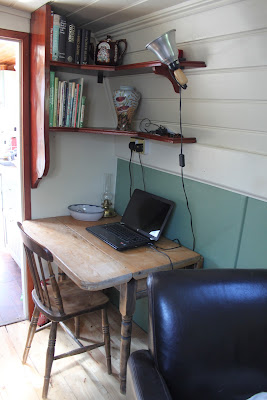 Well, it has been a busy couple of weeks and I'm afraid I slipped right out of the habit of blogging there for a bit. After I finished the research work I was doing (at least pending further instructions), we went back to Newhaven for a week, and then almost immediately set off on a little trip along with Adrian and Linda on Warrior - to Stourport and back in five days.

The best bit was this. At Botterham locks, there was a very nice, clean looking Volvo 740 GLE estate, H reg, and when we went to Droitwich at Easter Jim got talking to its owner about our love of Volvos in general, and old ones in particular. When we went down last week, the guy had brought a new van and was looking to sell the Volvo. It so happened that on the way back from Newhaven, Fang the 1988 240 GLE had started to exhibit signs of terminal decline, to whit, masses of smoke emerging from underneath whenever we went over fifty. After escaping the M40 (thank you NavFree!) for a five hour journey through the countryside around Chipping Norton (grim looking place) and stopping near Blenheim Palace to open the tailgate, grab the cat before he got out, and extract the bottle of oil in there in an operation planned with military precision, we diagnosed the cause as the crankshaft oil seal. Not economic to repair in terms of either money of effort when so much else about poor Fang was in decline, so it awaits the metallic knacker's yard.

And we bought the one at Botterham locks. It seemed that this was not a place particularly well served by public transport, thinking of coming to collect it, so I suggested to Jim that he drive it back and I would bring back Chertsey ON MY OWN. I had been steering for nearly the whole trip (the S&W is a canal that really repays a lockwheeler on a bike and Jim was quite insistent that was his role), it had all gone very well, and it felt like the time was right. There were six locks (plus the stop lock at Autherley), all uphill, and the territory was as familiar as any, so I went for it.

Well, it was fantastic. The very best bit was the first three locks on Monday evening. Warrior had gone on ahead, it was gone teatime, and there was no one else around (except for a few fisherman, and they don't count, especially when on lock moorings). I could get on with things at my own pace, completely unobserved, and it went like clockwork. The hardest part was shutting the top gates afterwards, which I was tempted to leave, but the bottom gates of all of the locks were leaking so badly I didn't dare, especially as I was likely to be the last one through that night. Everything else was pretty easy, and it was a very rewarding feeling.

When I got to Cut End there was a little bit of a queue, and some confusion as usual, so I tied up and went to see. When it was my turn I (even though I say it myself) made a fantastic turn, using a fair bit of power to get in in one perfect sweep. That was another brilliant feeling (my three point turn in Stourport basin felt good too). The only thing that went wrong in my entire solo trip was right at the very, very end - getting ready to pull up alongside Bakewell I moved over to the left too early forgetting just how muddy it is here, and had to reverse off again for another go. But all in all it was an absolutely fabulous experience and I can't wait to do it again.

Another one of those little finishing touches has finally been finished - a length of canvas fire hose to finish off round the deckboard, complete with brass ends. 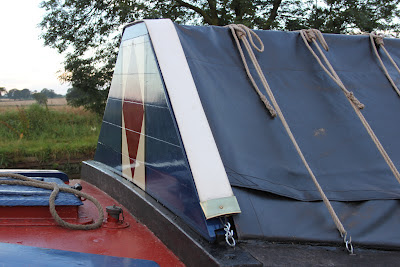 The brass for these came from redundant bits of the small fended we bought to go round the French DeVille Lily stove on Warrior. Knew they would come in handy! 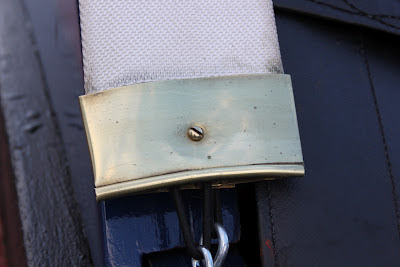 It is more usual to have a spring where we have elastic, but the elastic will do for now.
Posted by Sarah at 20:08 No comments: