Finally, on Saturday, the weather was good enough to do a vital job on Chertsey.

When we go to Langley Mill, we'll be mooring above the lock, so we'll need to get under a very low bridge. So we needed to put Chertsey back into 'Erewash mode', as we last did for our visit in 2013, and again for the Stratford in 2014 (I ask myself why we bothered putting them back up inbetween). 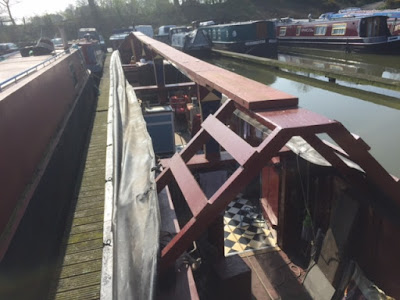 Doing this involves untying all the top strings, removing the topcloths, untying the sidecloth strings, lifting the top planks down onto the cross planks, taking out the stands, laying down the mast, removing the deckboatd, and, in Chertsey's case, taking down the frame that supports the top plank over the back end. Then, putting the supports under the cross planks, the boxes on top, the top planks on top of the boxes, retying the sidecloths, cutting a new length of translucent sheet (and the best way we could think of doing this was by unrolling it along the top plank), putting the topcloth on at the front, and retying the top strings. 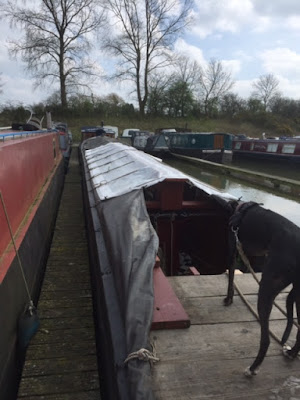 So, we needed a day with no rain, and no wind. Only Saturday fitted the bill. We had half hoped that if we could get it done quickly enough we could proceed on to the postponed HNBC AGM at 2pm, which was only 20 minutes away from Alvecote. In the end though we didn't - Chertsey was done by 2.30, but we were a bit knackered and decided to go back to Sheffield for a cup of tea instead. 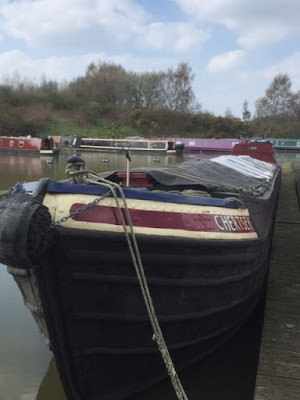 Chertsey still needs a massive clean up before we go off to Langley Mill, and the interior is in a state of absolute chaos, as all the bits of superstructure that have been removed (and I forgot to mention the plywood partitions that keep Ricky in), including the false cratch-like framework from the back end, are in the hold, leaving very little room to move. We want to take them with us though, as we'll be going straight on to Braunston after Langley Mill (yes, the joys of the Soar), and I'm hoping to get everything back up while we're there. In 2014 we did the reverse with the splendid assistance of the extended Herbies.
Posted by Sarah at 20:42 No comments:

I've been blogging for over twelve years.

Weeks, even months have gone by without a post, but even in my most fallow year I managed 44 posts - and 297 in my most prolific. 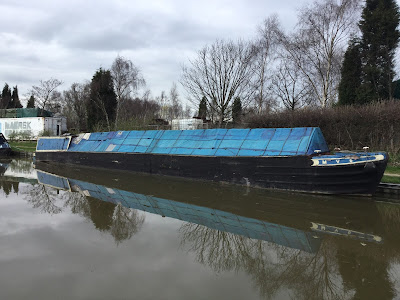 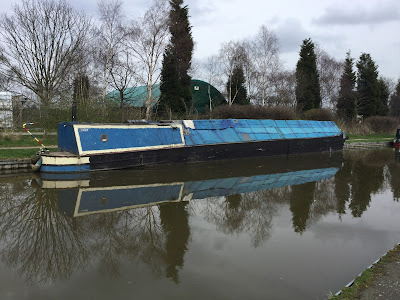 I promised I would come back with further thoughts - and questions - about the strike.

Well, they are still a work in progress, but here's where I am so far.

Firstly, in response to the thoughtful comments that were left by people who felt that I should have supported the strike - if I may address you directly - you were all union men (I was going to say 'former union men' but I guess once a union man, always a union man.) It seemed to be a reflex reaction that I should have supported and participated in the strike - and it felt as if that was borne of an unthinking belief that all strike action should be supported, whatever the cause, and whatever the cost - so my first thought was to ask whether that was the case? Because if it is, and there's no quetion of considering any particular action on its merits, then that's the end of the argument there and then. It's a position I can understand, but I think you have to have grown up in that culture, or to have been forged in the fire of something like the 1984 Miners' Strike, to be able to hold such a position so unwaveringly, so unquestioningly - more like an article of faith than a political argument. I'm very wary of taking up a dogmatic position on any political issue, as I've not only seen the harm that can do in others' hands, but even in my own.

Since writing the original post, I've been able to find lots of explanations about the background to the strike, and lots of arguments - most in favour, but a few opposing.

Clearly one of the areas where I depart from the strikers is on the collateral damage, which was the focus of my original comments. There is always a trade off between the cost of action and the reward of success - not least for the strikers themselves. So my concerns about the damage to students were not absolute - the idea that no damage to students can ever be justified - but tacitly included the belief that the rewards would not be worth it.

And this is, I think, the fundamental root of my non-involvement: a profound scepticism about the possibility of it resulting in long term improvement. The unfettered, deified capitalist system will screw us all. Any victories won by industrial action in the past 100 years have been short lived, hollow and pyrrhic. And I hate to say that - and would love to hear of exceptions to the rule. I hate to say it, because through talking to strikers I have realised that for many of them - you - it is so, so important to be able to believe in the possibility of making a difference. Of course I understand that, and I feel it too. But the way I make a difference is to the lives of individual students. I simply don't believe that we can take on the system and win, no matter how great our collective solidarity. And maybe that fundamental difference in belief is what, in the end, it comes down to.
Posted by Sarah at 19:00 2 comments:

I can hardly be disappointed at most of my favourite blogs not being updated very often when I can't even do my own, can I?

And in truth, it's that time of year, at last, when there should be something to write about. Last weekend we went to Alvecote to check on Chertsey for the first time in months.  Shed's been moved onto the far end of a long pontoon, which is great, because it means we have access all along one side. The cloths had blown about a little bit, and one string had come loose and was trailing in the water, but the translucents underneath were sound so no water had got in. The trouble is that the weather has been so awful. We're hoping for an improvement next weekend, so that we can completely redo the cloths. The plan is to take them all off (so it needs to be dry and not windy) then remove the deckboard and stands, lay the mast down, and drop the planks ready for our late May trip up the Erewash. We'll take the opportunity to replace the three year old translucent sheet, which is disintegrating where it's been exposed to UV, dropping pretty glittery flakes over everything. We'll deply the boxes Jim made to raise the planks in the middle to give a bit of a slope for the rain to run off (and enough headroom for me, at least, to stand up in the middle) - I'm hoping we can put the new translucents, folded, across the gap, to give us light inside. At my insistence, Jim is also cutting some wood to length to make 'dead men' to pick up the cross planks under the boxes - I just don't like the idea of all that weight and tension on the cross planks alone, especially as they're at least fifty years old and I want to keep them.

Other than that there's a lot of cleaning and routine maintenance to be done before - or looking ever more likely, during - the trip, and the bilge pump to replace.

Having been relieved to find that everything was OK after leaving the boat for months over the winter, Jim was horrified to find on his arrival yesterday that ducks had found their way inside - through a gap in the cloths at the front - crapped everywhere, and then, thankfully, found their way out again. So that was an extra job he would rather not have had.
Posted by Sarah at 11:44 No comments: