See how they run


Courtesy of the Captain of Princess Lucy
Posted by Sarah at 13:58 No comments:

What was in the van?

Halfie has shamed me into posting by mysteriously alluding to something his son Andy moved for me in his van last week...


Last year at Foxton, I think it was, Halfie mentioned that Andrew had a 'man with a van' business in Sheffield, and I filed that away in my memory in the knowledge that I was bound to need such a service one day. My Volvo 240 is brilliant, but being the saloon rather than the estate version its furniture moving potential is a bit limited. (For a couple of years when it was our only family car, it had the front passenger seat removed in order to fit Sebastian's double bass in.)


You may recall that the glamping boat interior of Chertsey's hold has a sort of fifties feel. We've been developing this further over the course of this year and have a number of plans (of which more, hopefully, later) - none of which involve anything permanently attached to the structure of the boat - to make it even more commodious for summer holiday cruising. We decided that we needed another kitchen cupboard/dresser - one with plenty of space for storing the tins and jars and packets that make up our provisions (the Origo has paid for itself many times over this year in the money we haven't spent eating in pubs) and hopefully provide a bit more preparation space.

One afternoon the week before last, I'd just popped out to the shops on a whim when outside the Oxfam shop I saw this: 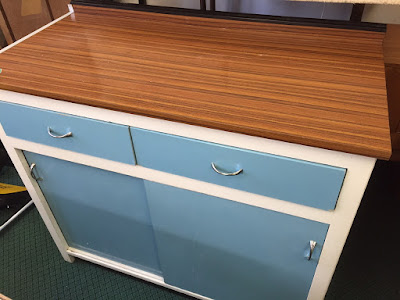 I crossed straight over to enquire - it had only that minute been dropped off; ten minutes later it had been spirited away inside and upstairs and I might well never have seen it. It still took another day and a half to get a price for it, which I willingly paid even if it was a bit on the high side (Oxfam's like that). I then had a week to take it away. Jim had just left Sheffield, having only the previous week picked up a washstand for me from the same shop - so I Googled Andy, and the unit is now in my hall waiting for Jim to come up this weekend, whereupon we'll put it in his Volvo and take it to the boat.


I've been looking back over the blog and it is such a wonderful record of the work we've done on the boat, it really does seem a crime not to keep it up - even if I do spare you the details of widith ((c) Granny Buttons)
Posted by Sarah at 17:34 3 comments: