Two big boats, two blokes on bikes, and two women who can steer in perfect accord = Hatton heaven! Two hours fifty without even feeling like we were hurrying. 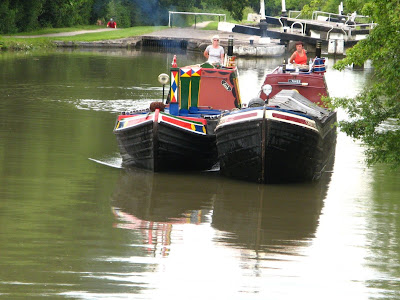 We left Blue Lias at 0700 and are now tied up three locks down the Stratford canal, where we arrived at 1745, having travelled most of the way with Tina and Ian on the josher Holland.
Posted by Sarah at 20:38 1 comment:

Sorry for the silence... sometimes you just don't feel like getting the iPad out at the end (or even the middle) of the day. Had a lovely sunny relaxing weekend at Foxton last weekend, then a leisurely run to Braunston and a few more sunny daysnat Braunston before the weekend started. A lowish key Braunston. It rained heavily on Saturday and I got soaked in the parade. Yesterday was nicer, with the Herbies playing on the deck. We sought advice about getting to Stratford and have decided we have to try - lots of people want to know how we get on! So on Sunday we dropped thenplanks before the parade, put a ton of coal in the fore end during it, and have borrowed a blue barrel from Fenny. Last night we filled it and our tanks with water at Blue Lias, having left Braunston at 3.30.

The start of the Big Trip approaches at last!

The trip itself is dependent on almost split second timing, but with stops and festivities built in. The plan is this...

On Friday I have a work meeting at the British Library, so that will be handy as it takes me half way (in terms of time; a lot further than half way in terms of distance) back to Newhaven, so I will then go up with Jim in the car to Foxton, to rejoin Chertsey. Once we've unpacked the car, Jim will take it to Stretton to await our return there and come back to Foxton by train and bus. We plan to spend this weekend enjoying the Foxton Locks Festival and meeting up with the Herbies before departing for Braunston. The following weekend (27/28/29) will of course be spent at the Historic Narrow Boat Rally at Braunston, but we have to leave sharpish as we are due in Stratford upon Avon for the River Festival on Friday 4th. We'll be making the journey there by canal, but when we leave it will be by river - our (but not Chertsey's) first time on the Avon and on most of the Severn. When we get to Stourport we will stop to enjoy the delights of the Holly Bush, before continuing via the Staffs & Worcs and finally the Shroppie to Stretton.  If I've Canalplanned this correctly, it's 171 miles and 149 locks, six tunnels and one major aqueduct (which I have a lovely photo of Chertsey traversing circa 1970).

The first week's travel will be very leisurely; the second less so! Hopefully we will be accompanied for part of the way by Herbie, and for another part by Bernard with Enterprise (in case we get stuck in one of those narrow bridgeholes...). New territory includes the Avon, the Severn, the southern Stratford canal and Stratford itself.

So far I fear we have not managed to secure an organ for the hold. But at least we will be there, fifty years after Chertsey's pioneering appearance at the IWA Festival of Boats and Arts in 1964.
Posted by Sarah at 16:27 4 comments:

I fancied baking on Saturday when it was pouring with rain, but I didn't fancy going out. So I came up with this rather gorgeous vegan variation on Delia Smith's 'marmalade cake'.

I did it all in the Magimix, but the theory is this:

Pour/scrape into a lined 2lb loaf tin and sprinkle the demerara sugar on top. Bake for about an hour at mk4/180 until you can poke something sharp into the middle and it doesn't come out gooey.

It's rather crumbly at first but firms up a bit (and the crust softens) if you keep it for a day in an airtight box. I kept it in the fridge as I thought it might be prone to mould, but then I ate it so that became academic.

Really, well worth a try. I thought it was lovely and it doesn't scream 'vegan' (not that there's anything wrong in that of course, but sometimes the most appalling stuff gets passed around in the name of vegan cake and you're supposed to make allowances - with this, like Kath/Carrie's banana cake, you certainly don't need to.)
Posted by Sarah at 13:00 1 comment:

Randomness is a great aid when one is paralysed by trivial choices. I often enlist an online random number generator to, for example, choose which CD to put on. The day before yesterday it selected the Tom Robinson Band compilation 'Winter of 89' which I'd almost forgotten I had. Being a rather old and probably inferior CD, it skipped alarmingly on 'Atmospherics' but other than that it was a lovely bit of time travel back to my not very misspent youth (although I did miss the last train home after going to the TRB 10th anniversary reunion at the 100 Club in 1987 and ended up rather embarassingly getting a lift home from Lewes in a police car). I still have the T-shirt!

Last night I enjoyed a compilation of Elizabethan anthems and organ music. However, the system cannot be relied on not to occasionally throw up some late Scott Walker, which as everyone knows, is only for decoration. Tonight I could be listening to 'The Drift', but despite having bought it when it came out, I haven't quite gathered the mental strength to actually play it yet.