Sending a letter feels really expensive these days, at 95p for first class and 68p for second (it's so long since I've bought stamps that I had to look that up).

Sending a parcel, on the other hand, feels like stunningly good value.

I've been to and fro from Newhaven a few times this year, and am delighted to be travelling by train again rather than by car. For me, it's far less hassle and less stress (yes, things can still go wrong occasionally, but at least it's someone else's job to sort it out).  It's even considerably cheaper these days. The only downside is that I can't bring so much stuff with me.

Last time I was down, in early June, I wrnt on a charity shop rampage, and then went and bought some fabric too. No way could I carry all that back on the train, so I parcelled it up and posted it to myself - and it was there waiting for me when I got back.

This time, I had my Volvo lights - which had already each made its respective journey by post - to bring back to Sheffield.

I also had something considerably heavier. 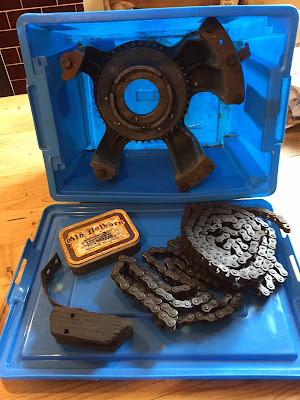 Chertsey's entire handstart mechanism, weighing in at nearly 15 kg. For reasons I can't recall, this ended up back in Newhaven after we took it off in Shardlow in 2010 to replace the shaft and bearings for the cooling fan, and never put it back on (no one except Mike Askin could actually hand start it anyway). For reasons I might get around to explaining later, I now need to get it back to Chertsey.

We discussed whether it was worth Jim driving it up to the boat, or even bringing me back to Sheffield with it (notwithstanding my unused open off-peak return ticket), but clearly that would be a very expensive hassle. Could we possibly post it? The Royal Mail website says that a medium (not even a large!) parcel can weight up to 20 kg, and its blue plastic box certainly came in under the maximum dimensions. So I packed it all up carefully, and parcelled it up in heavy duty polythene and gaffer tape so it looked like a proper parcel ... 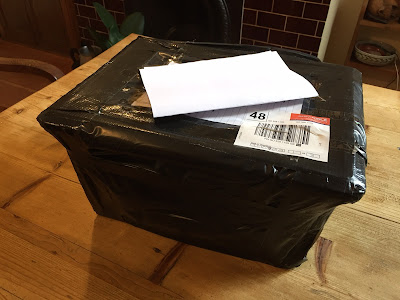 Then we wondered how to get it to the post office, a ten minute walk away. A wheelbarrow was considered until Jim had a lightning-bolt moment and realised we could take it by car, as the town centre car park is right by the Post Office.

I still had a sneaking feeling that surely this couldn't be possible and we'd be told to take it away again, but the young woman behind the counter (there wasn't even a queue!) couldn't have been more cheerful and helpful. I had the two parcels with the lights as well, and she said that as they were all going to the same address, they could go as 'a consignment' for £11.95 the lot.  Just leave them with her ...

And, when I got back yesterday, there they all were waiting for me. 250 miles in 48 hours for under 12 quid. I call that terrific value.

One of my less favourite activities is queuing in a Post Office, so I also think it's utterly brilliant that when I'm sending a parcel I can weigh it, pay for the postage online, and the postman will collect the parcel from my house!

I'm just off now to pack up and send Jim a curtain.

Well, what more could a girl ask for? 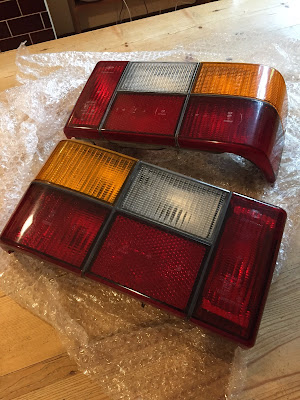 Cool (or, new uses for a sunbed) 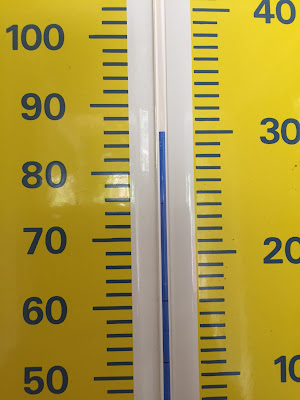 So this is why I needed a cellar 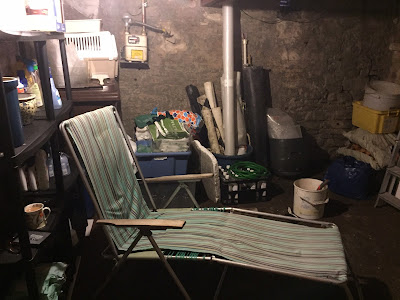