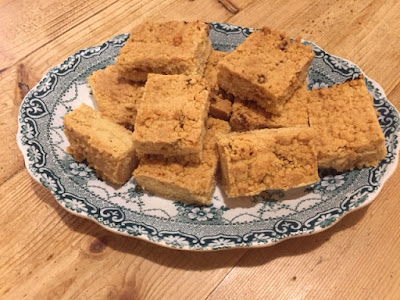 When I wrote back in 2018 about my friend Doug joining us an our way up the Erewash to Langley Mill, I noted that this had come about because of a conversation we had had a few weeks previously, over a coffee at the University of Nottingham, where I had gone to visit him (and his colleague Peter) to talk about setting up a journal.

It was clearly a successful conversation, because the third volume of The Journal of the Foundation Year Network is about to be published, and Doug, Peter and I are still its co-editors. Readers of this blog will be horrified to learn that I am also a demon copy-editor (the shameful secret is that I rarely proofread the blog before hitting publish, hence it frequently being riddled with typos).

What I did not note at the time was that something else momentous happened at that meeting. Idly browsing the pastry counter in the coffee shop in the utterly magnificent Trent Building (does that count as a waterways reference?)

I settled on something I had never encountered before: a piece of lemon curd shortbread. I think it's fair to say that was a life-changing decision. The combination of salty, buttery shortbread with sharp, rich lemon curd is sublime. You don't really need a recipe to make it, but just to encourage you, here is the one I cobbled together on my return. I have made it today for the first time in a year, because I've only just got hold of some lemon curd.

You will need plain flour, butter and caster sugar in the ratio of 6:4:2. For a tin that's about 10" x 8" I use 12 oz flour, a whole half pound of butter (and as that's a metric half pound, that's a bit extra) and 4 oz sugar. I cannot imagine doing this without the Magimix, but if you have big muscles and infinite patience you probably could. Just beat it all together until it's a crumbly dough. Then (don't guess) weigh half of it (i.e. half the total weight of the original ingredients) and put it in the tin. I like to grease and line my tin, then grease the lining, to be sure it comes out neatly. Press the shoutbread hard into the tin with the back of a spoon.

Now, this is the bit where I am going to save you a lot of grief. You need to get a thinnish layer of lemon curd all over this surface. For that quantity I would use about half a jar.  But you won't be able to spread it. Don't even try; that way madness lies.  You could possibly pipe it (but imagine the washing up) but my technique is to use two teaspoons to plop lots of little blobs over the shortbread, then just squish them about very slightly until they meet. Then you get the other half of the mixture and, breaking up any big lumps, distribute it over the top and press it down. Bake it at around 150C for about an hour. Lift it out of the tin (by the paper) to cool, and cut it up before it's cold. Seriously, it's divine. And it always reminds me of my first breathtaking sight of that building.