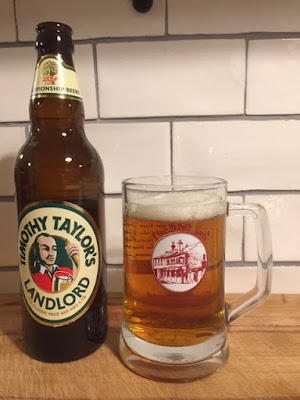 In 2005-6, I worked in Huddersfield for sixteen months (it was a two year contract, but when I broached the subject of leaving because I had secured a permanent job, my then boss said 'Thank goodness, we've spent all the funding for the post  and were wondering what we were going to do'). I'd commute back to Sussex at weekends, and during the week I lived on a boat on a BW towpath mooring just by Aspley Basin, the interchange basin between the Huddersfield Broad (aka Sir John Ramsden's) Canal and the Huddersfield Narrow (aka the Huddersfield) Canal, with a splendid view of the famous Locomotive Bridge.

There were a few great pubs in Huddersfield (the Albert Hotel, with its marble and mahogany bar, is particularly fondly remembered) but our favourite destination as an office group was the Star. 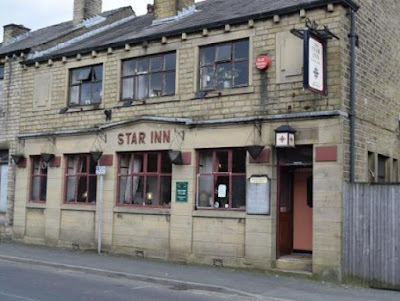 One amazing thing about the Star was that the landlady, Sam, was from Ditchling (that's in Sussex) and there was a framed Harveys of Lewes poster on the wall. It was in the Star, on Sam's recommendation, that I first tried Timothy Taylor's Landlord, which has remained one of my favourite beers ever since. Once a week, on Wednesdays, they served food, which was pie and peas. Nor was it gourmet pie and peas. It was a cheap shopbought pie, microwaved and plonked in the middle of a bowl of mushy peas, which you doused in mint sauce and ate with a spoon. I think it cost £2. I'm getting nostalgically tearful just thinking about it. When I left Huddersfield, my leaving do was pie and peas in the Star.

I am pleased and relieved to see that the Star appears to be holding up. And delving a little deeper on the dreaded Facebook page, it appears that Sam is still running it. I must get back there as soon as I can.

To get there from our office on the ringroad, we passed through a lovely industrial landscape, and crossed the River Colne.  Here is a stolen picture: 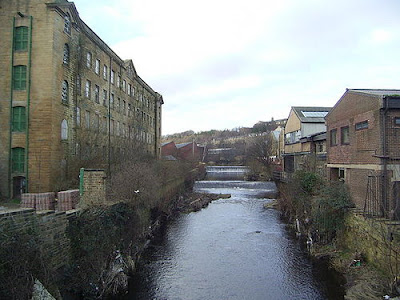 In the summer of 2005, Sam put on a beer festival at the Star. It was the first beer festival I ever went to, and provided the best beer festival glass I have ever acquired - an oversized half-pint, really solid, heavy-bottomed tankard. I am supping Landlord from it as I write. It was my work water glass, and rescuing it was one of the reasons I made my mercy dash to the office in October (that and my PhD thesis).

I don't remember much about the Star Beer Festival. It was sunny, and they had a mini-marquee in the garden. I think they had some Dark Star beers all the way from Brighton. If I didn't have the glass as a constant reminder I might easily have forgotten about the Star, Sam, discovering Landlord, pie and peas with Pete and Pete and John. Maybe I would even not think so often about my very happy time at Huddersfield when, Landlord, pie and peas and all, I fell in love with the North.

This is the first in a series of 'Souvenir Beer Glasses I Have Known', all of which have a waterways connection, of course. As will every post I ever post from now on.