Have I been to Bristol?

I'll try not to get into the habit of just responding to Diamond Geezer's posts, but a couple of days ago he had a cracker, which along with its follow up yesterday has been keeping me intermittently entertained ever since.

His question was 'what is the largest town (or city) you haven't been to?', and he helpfully provided a list of the hundred biggest towns and cities, by population, as defined by the Office for National Statistics.

I cast my eye down the list and Bradford, at number ten, leapt out at me as somewhere I haven't been. Bradford was the stumbling block for quite a lot of people, being populous, but not necessarily popular.  This would only count as somewhere I have not visited if the population of Bradford does not include the population of Shipley or Saltaire, both of which I have been to. I have tried looking at the data to see whether it does, but it defeated me.

If it turns out that I have, technically, been to Bradford, then the next biggest place I haven't been to is much more definite - Hull, twelfth on the list. I'd love to go there one day, but it is, for no more than geographical reasons, the sort of place that you have to make a deliberate visit to.

However, when I went back to post my comment, I looked at the list again and saw Bristol at number 4, and I thought, hang on, I haven't been to Bristol. I have changed trains there many times, mostly on the way to Newport, but the rules are clear that changing trains doesn't count.

may have been aimed at me.

But then I thought about it some more (I said it kept me entertained for days) and I remembered this photo: 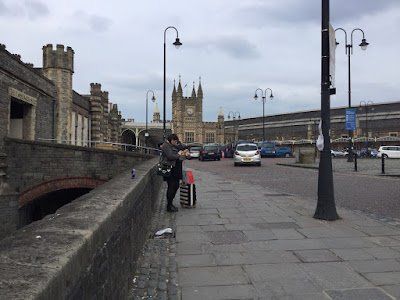 Changing trains doesn't count if you don't leave the station, but given that under his own rules DG has 'visited' Southampton by virtue of slipping out of a station side exit, briefly, then being this far away from the station must count, even if that is where one has just been dropped off by the rail replacement bus.

So although I would very much like to go back and explore properly, I have, unequivocally, been to Bristol.