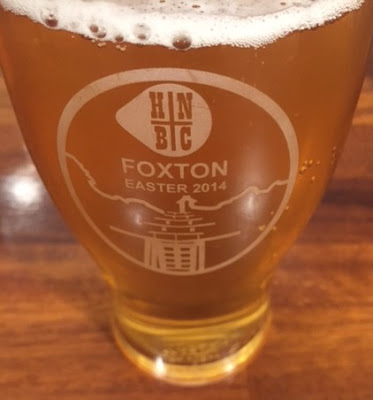 We have come to the end of my official 'beer festival' glasses. However, so intertwined are the worlds of historic boating and traditional beer drinking that it is often hard to distinguish between their gatherings. There's always a beer tent or a bar - or, in the case of Droitwich, a Working Men's Club, that one being memorable for the least flavoursome ale I have ever been forced (yes, forced, I say) to drink for three days (Wye Valley, yes, I mean you).

But in 2014, when we had our biennial southern (well, more southern than Ellesmere Port) Easter Gathering at Foxton, there was even a glass. Sadly, in order for the design to be visible, I have had to fill the glass with beer. I have just trawled through the posts from March and April 2014 to refresh my memory of this event only to find that there are none. A few posts about the lead-up (would we replace the starter motor in time?!), one about the quiz and a brief mention of the tat auction, but that's it.

I do recall that I actually helped out on the bar this time, which if I recall was in the village hall. The beers probably came from the Bridge 61 (pretty sure some emergency supplies did) and therefore likely included Inclined Plane (if I were marking this, as I was essays all weekend, I would now be thumping out 'avoid speculation'). I remember the 'fact' that we went up the Market Harborough Arm, turned round and came straight back ... except I don't think we actually did. We probably thought about it, just as we thought about going to Basingstoke.

Other than that, well, I've been through, and stopped at, Foxton quite a few times so it's all a bit of a blur. It may have been on this occasion that we strung the keb with garden wire in an attempt to retrive someone's glasses that had fallen in. We were eventually partially successful, but unfortunately one of the lenses had dropped out. Or the time there were dog rose petals strewing themselves like heart-shaped confetti.