I posted about my old furry (and otherwise textile) friends two years ago.  Eventually I brought them home in a cardboard box and stowed them - safely, so I thought - in the attic.

But when I went to look one of them out before Christmas, tragedy had struck the merry band, in the form of a vicious attack by moths. 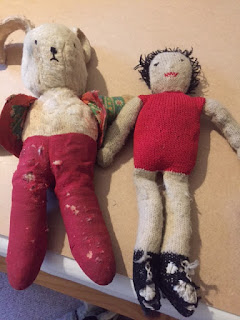 In the case of Daisy and Bonny, this proved fatal. Some of the others also, to whom I wasn't particularly attached, have been banished as likely carriers.

On the plus side though, as a child (literally) of the sixties, most of my toys were made of synthetic fibres. So Jumbo Tint is unscathed apart from a tiny nibble to his velvet ear-lining, Mint the dog is no more dog-eared than previously, and Whisky the Crimplene rabbit remains pretty much indestructable as long as he stays away from hot irons.

They have all been quarantined in a big plastic bag pending treatment.

Today's reason to be cheerful: Finally getting a supermarket delivery slot for the first time since October.