I've been baking my own bread since March.

When I first got a breadmaker, all the advice was that you had to follow the recipe they gave you with scrupulous accuracy, down to the last gramme (and a large wholemeal loaf called for 528g of flour). The recipes that came with it also called for strangely large amounts of sugar, and quantities of dried milk, and crushed up vitamin C tablets. In short, they were replicating commercially made bread - the very thing I wanted to get away from.

I never added vitamin C, or dried milk, so they have their escape clause if ever I'd tried to complain. Sticking to the quantities otherwise, I could turn out a most impressive white loaf, no problem, but wholemeal always sank alarmingly, giving a slice with a profile like a cat's head, with points that could lacerate you.

Naturally, I sought the advice of the internet, and the suggestion that caught my attention was something along the lines that the machine doesn't get the gluten lined up properly before it starts cooking. I followed their suggestion to allow the breadmaker the sticky job of the initial mixing of the dough, and its first proving, but then turn it out, knock if back by hand, and leave it to rise in a loaf tin before baking in the oven. And this works. 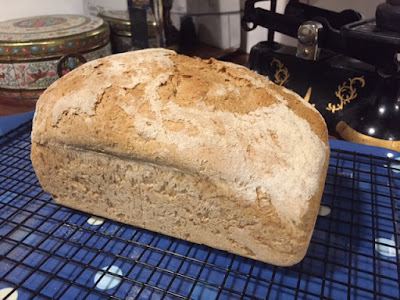 There is the added advantage that your loaf is now a sensible shape and size that will fit into a plastic bag, and doesn't have a bloody great hole in the bottom.

After months of experimenting I have now also arrived at a simple back to basics recipe which, using this method, works every bit as well. And it is: half a pint of warm water (or a bit more depending on the flour); half a pound each of white and wholemeal flour; a level 5ml teaspoon each of sugar, salt and quick yeast, and a glug of oil. I pour the oil over the mixing blade (though I doubt if it makes any difference), then the water, salt, sugar, flour on the top and yeast on top of that - then the machine does all the sticky hard work leaving me with the fun part of the final knead. It goes into a 2lb tin and once risen, into the oven at a touch under 200 C for 35 minutes. It might not always come out perfect, but it's never less than adequate and better by far than the machine baked version.