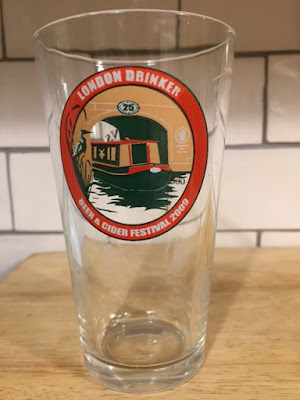 My second souvenir beer glass is from 2009 (I'm not a massive beer festival goer, much as I like the stuff). It's from North London CAMRA's 'London Drinker' beer festival. I was working in London at the time, just down the road in Tavistock Square, but the only reason I went was because the festival's chosen charity that year was the Camden Canals and Narrowboat Association, with which I had not long since become involved. CCNA run the Large Northwich  Tarporley as a community boat, and have done since c. 1970. I signed up as a volunter before I got Chertsey, but when I knew I wanted a big 'un, to get some serious steering practice (yes, I know Tarp's a Northwich, but needs must. Through people I met via CCNA I did also get in a lot of steering experience and informal training on Chiswick, for which infinite thanks to the late Bob Wakeley, and to James Bill). Checking out whether CCNA and Tarp are still going I see that she's had a splendid new Coronation paint job. 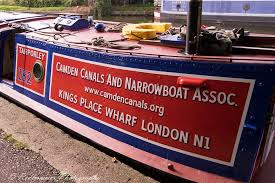 I'm sure CCNA won't mind me using their photo. (I also note in passing that Kings Place is now a WeWork. Sic transit etc.

CAMRA entered into the spirit, if not the historical accuracy, of their charitable commitment by featuring what looked very much like a Calcutt hireboat on the festival logo. It was their 25th anniversary, hence the bridge number. I got a T-shirt too, 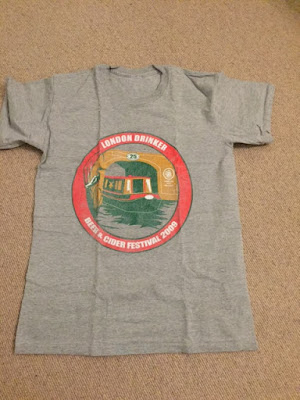 which no longer fits me (but I feel a new series coming on once I've exhausted this one). I also bought a Courage Directors T-shirt, which was smaller still, but was the last one they had. As for the festival itself, well, I described it here at the time. My abiding memory is of crowds of smelly men with either beards or very interestingly bad complexions (or possible both of course, the former camouflaging the latter). To be perfectly honest I didn't really enjoy it, but I'm glad I went.