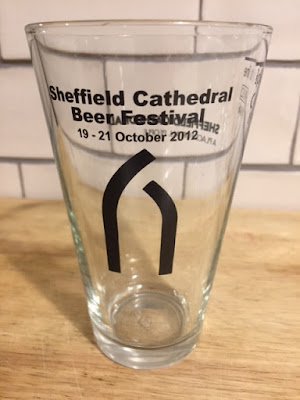 Having just searched the archive I find to my surprise that I didn't blog at the time about my final beer festival glass. Only three beer festivals, I hear you cry. Yes, I was quite suprised myself. Only three from which I have glasses at any rate. It is perfectly conceivable that there have been others that I have forgotten about.

Each festival has been linked to a different job and workplace, first Huddersfield, then London, and finally Sheffield. Little over a month after my arrival, Sheffield Cathedral ('a place for all people') hosted a beer festival. This proved to be quite controversial, with local radio phone-in lines hot with people pointing out the paradox of a beer festival being hosted by an organisation that also worked with problem drinkers. I don't think they tried it again.

Anyway, I trotted along and did my bit of milling around the forecourt where the festival was being held in a marquee (I still haven't been inside the cathedral) before settling down at a table in the October sunshine.

Being alone in a new city, I had promised myself that I would strike up a conversation with the first person who sat at my table. This turned out to be a Sikh man who worked for Network Rail, and had come by coach with a CAMRA party from Leicester, a city on the River Soar which I have visited by boat. I'm afraid I've forgotten his name (quite impressed I remembered so much else) but it all formed part of a very pleasant introduction to the city which I have come to call home.