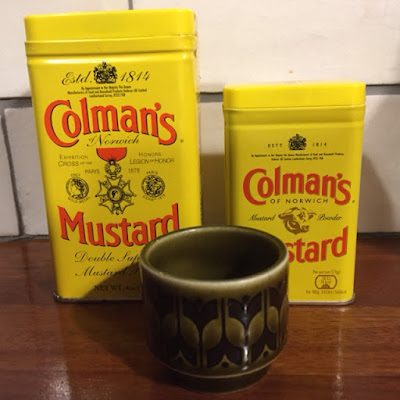 For a long time, on my Sheffield charity shopping expiditions, I was on the lookout for an egg cup. I found one eventually on the bric-a-brac stall at the Erewash Canal Preservation and Development Association's gathering at Langley Mill in 2018 (good, now I don't have to work in a gratuitous reference to the River Yare). It's a lovely green Hornsea Heritage one, which matches the mug on Chertsey's cabintop in a 1970 photo which I can't now find, which is a bit worrying, especially as I forked out a tenner on Ebay to get one like it for the fiftieth anniversary trip that didn't happen last year.

Obviously I didn't want an egg cup so that I could eat a soft-boiled egg. Perish the thought. No, I wanted an egg cup to mix mustard in. Mixing the mustard for the quinseminal (I just made that up) boiled bacon joint (Sunday dinners rotated through roast lamb, beef, chicken and pork, and boiled bacon) was a ritual I remember from childhood - the egg cup, the yellow powder, the tiny trickle of cold water, stirred with the handle of a teaspoon and left to develop for ten minutes. After all that, I never tasted English mustard as a child - it was assumed that it would be too hot for little tongues. This being the seventies we got mild, vinegary 'French' mustard instead. I liked it then, but I can't stand it now.

I am prompted to write this because I have just - for the first time I can ever remember - finished a tin of mustard powder. Most tins of mustard powder probably never get finished. I husbanded mine well, though, protected it from damp, and if it had lost a little potency by the end, I can't say I noticed. The tin I bought to replace it has a 'best before' date of May 2022, so on that basis I'll assume that the old one had a similar nominal shelf life (16 months) when I purchased it. Its 'best before' date was May 2015, so that suggests I probably bought it early in 2014 - seven years ago. I think that for a single person to get through a 4 oz tin of mustard powder in seven years is pretty good going. It went religiously into cheese sauces, as I was taught at school; into cheese scones - where it really does make a difference - and of course, into tiny portions of fiery paste to adorn, well, sausages, mostly, and alongside them mashed potatoes, and greens. And no, I very rarely threw any away, but always made it in such tiny quantities that it was never quite enough rather than too much.

Back in 2014, the tin indeed said '4 oz (113g)'; the new one, half the size, says '57g'. I like the way it's still clinging to being 2 oz by another name; I bet the next tin will be 50g (and before anyone either casts me into the outer darkness, or grasps me to their sceptical bosom, my attachment to imperial weights and measures for comestibles and cooking should not be taken as any indication of anti-Europeanism, any more than my perverse persistence in speaking English. It's practical and pragmatic, not ideological). The new tin has lost a little character, and gained a Unilever logo and a nutritional infographic (really - who counts the calories in mustard powder?). It isn't - very sadly - even made in Norwich any more, as of a couple of years ago. I will, of course, be keeping the old tin.