Apologies for the absence of plant photos yesterday; it is most mysterious. I confess that I was lazy enough to just copy the emails across in their entirety, but when I switched back to my personal account just now and opened the blog in a new tab, they were still there. Anyway, I hope you enjoyed the text. I think with the exception of a few people who must have led very sheltered lives, most people can picture a weeping fig and a money plant - if not, there's always Google.

You might perhaps have wondered about the home from which the plants were eventually evacuated: Edgar Allen House. It sounds quite imposing, doesn't it. In fact it's  PoMo monstrosity occupying a street corner just off prime drunken vomiting territory. 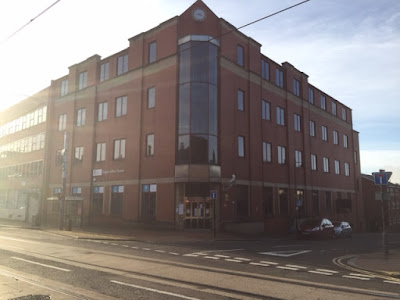 It's nothing to do with Edgar Allen Poe, in case you were wondering.

William Edgar Allen was a steel magnate (of course), and slightly ahead of his (Victorian/Edwardian) time in that he sought to look after his employees when - as appeared to happen with alarming frequency across the industry - they susteined industrial injuries. This included setting up a physiotherapy centre and supporting some pioneering work in artificial limbs.

When the NHS was established they took it over, at some point (presumably in the 1980s) demolished the old Edgar Allen Physical Treatment Centre and build Edgar Allen House.

I had always understood that this was on a different site, but this old photo (from the Sheffield Libraries Archive) actually looks like the same site as the current building. 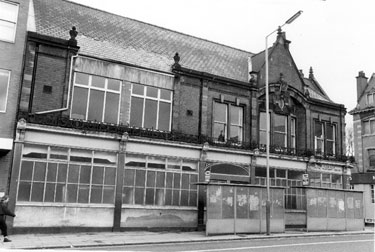 You can tell how assiduously I do my research. Anyway, the NHS moved out at some point, and the University bought the building in 2011. We moved in in 2014. It was supposed to be temporary.