My father died in 1992. My sister and I packed up the contents of his flat. Some boxes went back to my place, some back to hers. When my sister died, her boxes ended up in my mother's spare room. When my mother died nearly five years ago, they all found their way back to me.

Over Christmas, I opened the last one, and picked through the crumpled 1992 newspaper. This was a box that my sister had packed, of ornaments from my father's living room. Some I remembered, and some I had never seen before. Most of them, to be honest, were not very interesting - cheap holiday souvenirs. But there was the lovely hand-carved wooden bowl that I posted at the end of last year. There was another piece of Berlin Wall - packed away only two years after being hacked out (I now have four pieces of Berlin Wall, all purchased on the spot from the pickaxe entrepreneurs by my sister in early 1990).

And there was this. 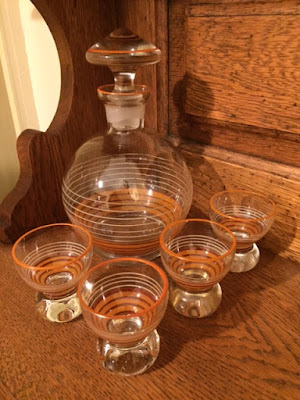 I have confidently billed it '1970s glassware' because what other era could it possibly be from? The glasses are tiny, scarcely bigger than egg cups, from which you can divine the size of the decanter. The stripes are orange. They are probably very trendy in some circles. I must quite like them, because I've washed and polished off the thirty year-old Woodbine smoke and put them out on the dining room sideboard. For now.