I was meant to bring sdome old friends back with me from Sussex, but unfortunately they got forgotten in the excitement of seeing little Rory.

A few weeks ago Sebastian texted me a photo, and asked if I remembered any of the faces in it. 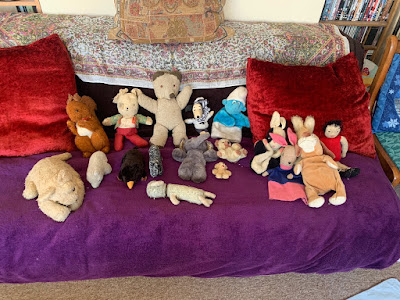 Oh yes, with the exception of a couple who weren't actually mine (a rather inferior polar bear, a mole, a dog and a smurf), I can name them all: back row: Squirrel Nutkin, who belonged to my cousin(s) but was greatly coveted by, and somehow came to be given to, me; Bonnie the rabbit, in his natty jacket (he never got that tatty under my stewardship); Mushroom, the teddy I was given relatively late in life, because I was envious of my sister's ted that she cuddled in bed - I had a teddy, of whom more later, but he wasn't the cuddly type. Then there's Snoopy, wearing his Newick Sunday/Haywards Heath Sainsbury's football strip (the teams, as well as the shirts, were pretty much interchangeable back in the eighties), then the imposter Smurf.

In the middle row we have Leon the lion cub, who I made out of a kit, then after the polar bear and the mole, Strupkin, a strange hybrid of zebra and tiger whose purpose I could never quite discern, then Jumbo Tint, named, apparently, because it sounded a bit like Gamboge Tint, which is a shade of yellow. Jumbo Tint has always had a strange and distinctive smell, which I'm pleased to say he still retains. Then there are two small bears, that larger of which is Spencer, and the smaller, Medie (because in some crazy scheme of things he was the medium one. Bigger anyway than Teeny Tiny Ted (not pictured)).

Then there are two rabbit glove puppets. The black and white one is Harry Habitat, because I bought him in Habitat, with £1.05 of my pocket money. The other one is Whisky, who is made of Crimplene. I had dresses made of the same fabric - in fact, Whisky must be made of the scraps. So named because he was originally called Whiskers, until I pulled them out. Whisky is actually a masterpiece of maternal craftpersonship, and was one of my most played-with toys. I can vividly recall the sensation of inserting my fingers through his neck and into his head. Imposing himself like a drunken oaf on the scene is Helmut, a dog of much later vintage, who is almost obscuring modest, knitted Daisy. I don't know who knitted her, sadly. Lying across the very front is Mint, who believe it or not, is a dog, and another one of whom I was very fond. He only has three legs now, but it would be perfectly possible to transplant his tail as a substitute and no one would be any the wiser.

Coincidentally, around the same time Sebastian sent me this, I was looking through some old photos I brought back from my mother's, among which was this. 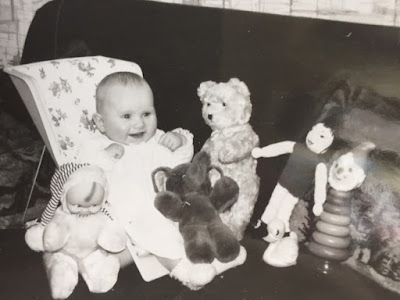 That's me, second from the left (on seeing this one of my colleagues remarked 'That's the smiliest I've ever seen you), and look! There's Jumbo Tint and Daisy.

And between Jumbo Tint and Daisy, on my left, that's Tweenie, my non-cuddly teddy. I always thought of Tweenie as a very wise and kindly bear, until I discovered this photo. 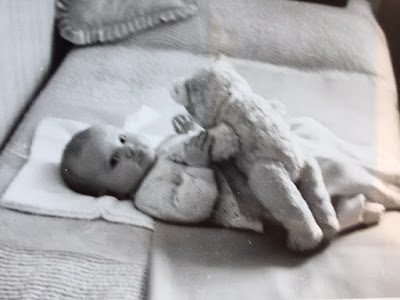 I have no memory of this, and Tweenie has never mentioned it. 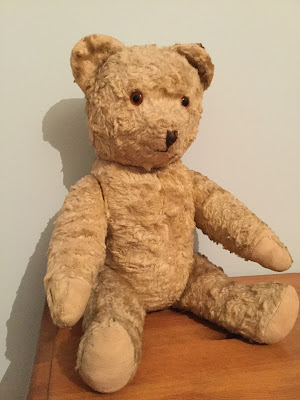 Not being cuddly has its compensations, in terms of longevity. Here he is at fifty-plus, as handsome and as enigmatic as ever.