Keeping an eye on the clock

Or rather, trying not to - seeing if I can be less governed by the clock, and become more reattuned with my - and the world's - natural daily and seasonal rhythms and cycles.

This is something that's been in the back of my mind for years, but in constant conflict with my tendency to categorise and compartmentalise; to want to have my time as tidily organised into neat consistent parcels as my space. Only it doesn't work anyway, because real life gets in the way.

I was prompted to think about it again on Friday, when I read this article in the Guardian. As anyone who has read this blog for a year or two will know, I rail annually against the manipulation and dishonesty that is British Summer Time. Yet - with the exception of the movement of the earth on its axis and around the sun - all 'time', all chronology, is an artificial construct. Yes, it has its benign uses, in enabling us to co-ordinate meetings with friends, or televised snooker matches, but beyond this it tyrannises us in the interests of - let's be blunt, if perhaps a bit simplistic - capitalism. It corralls us into all doing the same thing at the same time, albeit now by subtler means than the factory hooter.

On top of all these ideological objections, sometimes recently I've not been sleeping very well. I make myself stay awake until ten, despite dozing off over my book, then I lie awake until midnight, or wake at two, or four, and then when my alarm goes off at six, I haven't always had enough sleep to get me through the day. But it's really hard to go to bed when the clock says half past eight; it's so culturally ingrained - which is demonstrated by how quickly we 'adapt' to BST. Seeing the clock affects us at a subconscious level, telling us how tired or hungry we 'ought' to be.

So, can I live without the clock? In many ways, I'm an ideal candidate to try. I'm personally and ideologically motivated; I live alone; I hardly watch any TV (and there's catchup anyway), and most importantly, my working hours are flexible and I very rarely need to be in the office before 9:30. On the days when I have those meetings, I could set a backstop alarm to allow me enough time to get into work.

But can we avoid the clock? I think maybe I can when it matters most. Obviously when I'm sitting in front of a PC or looking at the iPad, the clock is there in front of me (there's probably a way of hiding it - not least a post-it note) - but that will be during the main part of the day - usually the working day, and I know that I won't be able to avoid it during the working day because of numerous meetings and appointments. But - no doubt because of its constant electronic presence - I was actually surprised to find that I only had three operational clocks in the house. One is in the attic, so I'm not likely to catch sight of it by accident. One is my bedside radio alarm clock, which I switched off at the plug on Friday night. The darkness in that corner of the room seemed just that bit blacker than everywhere else. And one in the kitchen, which I'll need to keep at least until I get a kitchen timer. It would also be really useful to have something that tells you just whether it is or is not an appropriate time to go shopping/hoover/play music.

So on Friday night I switched off the bedside clock, took off my watch and put it in a cupboard, and read on the sofa until I felt like going to bed, which ended up some time between half nine and ten. I fell asleep, and when I woke up I had no real idea what time it was, but I felt rested and ready to get up, so I did. And I put my running things on in an act of faith that it wasn't two a.m. In fact when I got down to the kitchen and looked at the clock, it was 5:10, which was just about perfect. I'm sure that I'm a lark as opposed to an owl; someone who's an early riser and functions best in the mornings - but if that is the case, I won't need to set my alarm for six, will I.

On Saturday night, on the other hand, I didn't sleep so well. I went to bed later - at around ten thirty, and spent quite a lot of time in the earlyish hours - although of course I don't know exactly which ones - thinking, occasionally writing down thoughts in my bedside notebook (not least working out the length of topstrings). 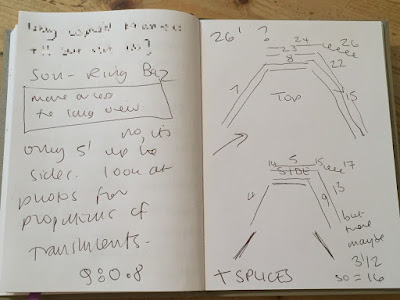 Once again I got up when it felt right, and put on my running stuff before looking at the clock - and this time when I got downstairs, it was twenty to eight. I did have an inkling of that as I could see it was starting to get light. Clearly, it will take a while to get into a pattern - if indeed that happens.

It's going to be really hard to break the habit of being ruled by the clock, particularly as I will still have to be guided by it at work, but I'm going to give it a try. If I can just decouple sleeping from its clutches, that would be a good start.