To go with your tea, you might like a bit of bread, or toast, and jam. Or a scone.

Just down the road from me, there's a bit of land (where I believe some cottages used to stand) which is now a 'nature park' but also serves as a sort of community garden, planted with apple, cherry and plum trees, and with a good growth of brambles.

I was very excited about the prospect of making plum jam, but someone picked the tree bare while I was off boating. Maybe next year. I'm toying with the idea of a plum tree in the garden - I have a lovely sunny wall - but ... wasps.

However, as I walked back through the park each day I picked a few blackberries, and put them in the freezer. Today, I finally got them out - because I've run down my stock of pre-prapared dinners, and wanted to take the opportunity to defrost the freezer. So, I had to preserve the blackberries the old-fashioned way: 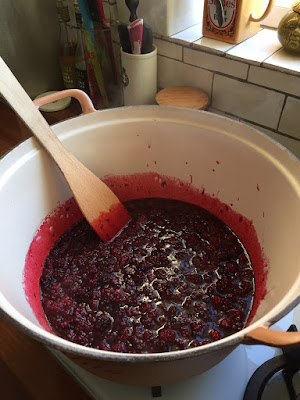 I had 1 lb 11 oz (or 777g, if you prefer, which I don't. Love metric for measuring, but not for cooking) of blackberries. Having been frozen gave them a head start in the squishiness stakes, so they didn't need much stewing. 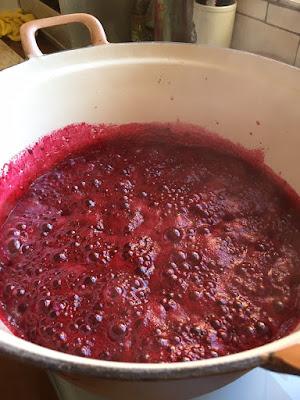 I got my splendid Le Creuset enamel preserving pan in a charity shop in Eastbourne, for £6.99. Sebastian then very kindly carried it around the rest of the shops for me. I thought it might be a bit big for such a small quantity, but it was fine, and I was glad I'd used it. 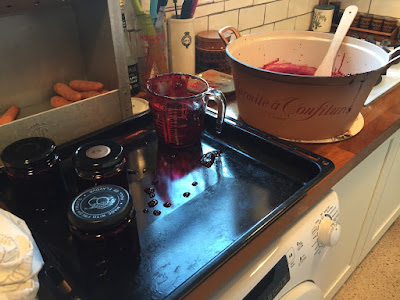 I remembered how to do it without a recipe, and got very nearly three 12oz jars. And after putting it off for months, in the end it only took half an hour. 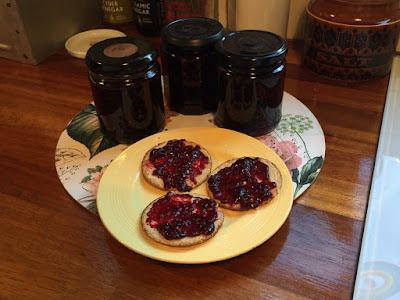 It's set well - almost too well - and yes, it is pippy, because I couldn't be bothered to sieve it. But it's jolly tasty, and such a lovely colour. Although I don't think Captain Ahab has anything to worry about.