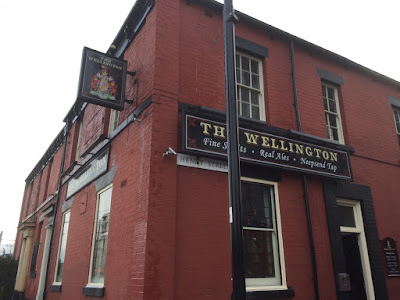 Remember that one of the ideas I had for providing blogging material was to see how many pubs I could visit that are featured in the CAMRA guide to Sheffield's Real Heritage Pubs (ed. Dave Pickersgill)? Well, here's the first (not the first I'll have visited, but the first I'll be writing about.

Jim and I (and Ricky and Geoffrey) stumbled across the Wellington at Shalesmoor when we were out for a Boxing Day walk (I'd taken him to see a demolition site and the country's last remaining cementation furnace - I must blog about that one day too). The Wellington was on the radar because it's a sister pub to my most local of locals, the Blake, owned by the Neepsend Brew Co. and serving as their brewery tap.

It's quite a good find for a first visit as the guide puts it in the third category of six (and there are only three in the first, those that are in the National Inventory - including one I visit frequently and which is possibly my favourite Sheffield pub - and very handy for the office, so we'll be hearing more about that one before long). The Wellington is listed in the Yorkshire Regional Inventory in the category of having 'some regional importance' - meaning that while it doesn't retain a significant degree of its original layout and fittings, 'specific features are of sufficient quality for the pub to be considered noteworthy'.

Built in 1839, the pub retains many features from its 1940 refit as well as some older ones, including the terazzo floors. From the 40s there is the 'ply panelled bar' which I'm afraid I neglected to notice. It was the tiles in the lobby which look to be from the same era if not a little earlier - which first drew me in. 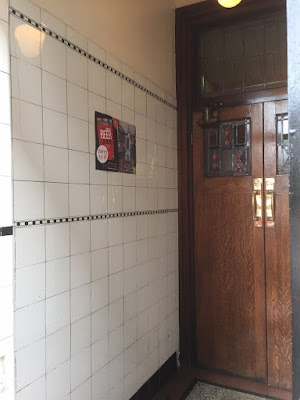 The pub doesn't look much from the outside - a little intimidating, if anything - but inside it was very nice, and friendly. When we first arrived it was nearly empty, but it filled up quickly with what were clearly regulars. We sat in the tap room, which boasted a nice collection of old pub memorabilia and advertising, including a Craven A clock, which complemented the inter-war Tennants' leaded windows. I can't remember what I drank - it could well have been Neepsend Blonde. One interesting feature was that not only does the pub retain the three-room layout from the 1940 refit (and now I've read about it, I can see the vestiges in other pubs, including the Blake, where the rooms have been knocked through) but the rooms are numbered. 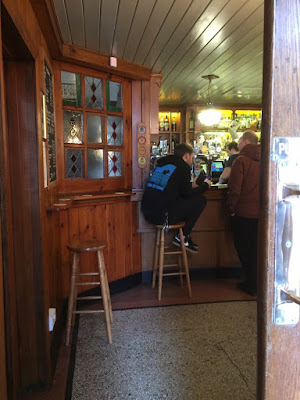 I snapped one last quick picture as we left, showing the terazzo floor in the main bar, with the tap room door just to the left. I expect it'll be a while before we pass that way again, but I wouldn't hesitate to pop in.