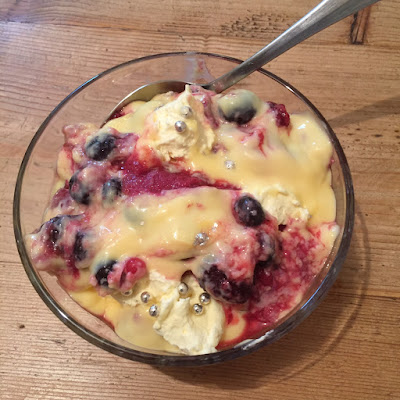 I make a trifle for Boxing Day.

This year I couldn't find trifle sponges in Tesco's - that's not to say they weren't there; trifle sponges are one of those things you can never find in the supermarket - so I used some very cheap swill roll instead. It has to be very cheap, so as not to have any buttercream in it, which I suspect wouldn't be very nice.

Traditionally, my trifle was made largely by opening tins - a tin of raspberries, a tin of summer fruits, and a tin of Ambrosia custard. The tinned fruit seems to be getting harder to come by, and I'd accidentally stocked up on frozen summer fruits, so I thawed it out with lots of sugar and no small quantity of sherry, and the results were perfectly acceptable.

The custard comes in cartons now rather than tins, but you get more of it.

I don't bother piping the whipped cream on the top, I just dollop it out with a spoon.

Fortunately I still had plenty of silver balls left over from a decade ago.
Posted by Sarah at 06:00