Boating on the village green 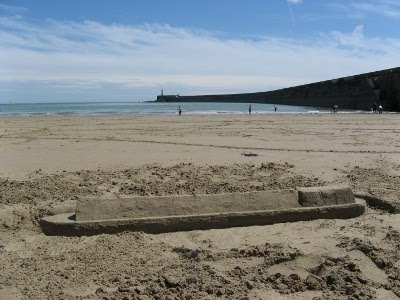 You won't have been following the saga of Newhaven's West Beach, the only sandy beach along the coast for miles either way. The whole of the port of Newhaven, including the beach, used many moons ago to be owned by British Rail, who operated the Sealink ferries. The ferry operation alog with the port however was sold off to, first to Sea Containers, and is now owned by Newhaven Port and Properties which despite its name is a French owned company.

A couple of years ago a bit of concrete fell off the sea wall which encloses this lovely little beach. Obviously, NPP didn't want to fork out for the large scale repairs that the concrete wall clearly needs. But on the other hand, neither did they want to get sued if the next lump of it fell on a sunbather's head. So from their perspective the answer was obvious: close the beach and bar all access.

And thus for the last two summers the tide has gone in and out and washed away no sandcastles or writing in the sand; filled in no holes, nor even carried away any litter. You can stand above the beach and marvel at the pristine smooth sand that no one but the gulls can touch. But that might be about to change. Some enterprising soul had the idea of applying to have the West Beach designated as a village green. If this were successful - which would entail demonstrating that local people had used it for recreation for over twenty years - then access to it could not be barred, and, by implication, NPP would have to maintain it.

So a campaign was mounted, calling on people to dig out old photos to show how they'd used the beach over the preceding decades. The evidence was presented to a planning inspector, who makes a recommendation to the County Council, who have the power to make the designation. And it was reported today that the inspector has recommended that the West Beach should be accorded village green status, which is great news. It may not be a final victory however; not only do the County Council still have to give their approval, but I wouldn't be at all surprised if NPP were very slow to act. Fingers crossed however that next summer we'll be building sandcastles again.

Anyway, this gives me the chance to post one of the photos of my finest hour in the sand, back in July 2007 (and incidentally show how lovely the beach is).If you want to see the whole process from start to ignominious end, then look here.
Posted by Sarah at 18:18