Seeing the sights of Sussex

A brief but intensive interlude last weekend, as Bill and Michelle (residents of Chapel Hill, North Carolina and owners of Shilling) visited southern England for the first time. Shilling's out of the water for a survey and to have some work done, so Bill and Michelle decided to leave the Midlands behind for a part of the country they'd not seen before - and we were to be their guides.
We met them at Lewes station on Friday, and showed them to the Dorset Arms, where they were to stay (it all proved very satisfactory, I'm pleased to report). We stopped there for a couple of pints of Harveys, and then some lunch... a precedent which was to set the pattern for the next few days. Then we left them to have a rest and find their feet before returning to take them to the John Harvey Tavern for the evening. This is the Harveys brewery tap, and Old was the order of the evening. The place was very busy, and the food really no more than adequate. Prior to leaving the Dorset we introduced them to the parochial pleasures of Toad in the Hole.
Saturday was devoted to the seeking out of white cliffs - Sussex's, apparently, because they are unprotected and constantly crumbling, are far whiter than Dover's. We set off in the car to Birling Gap, but Jim decided that Bill and Michelle should see a selection of feudal Sussex villages en route. One of these was Firle, and as we entered its main street we saw a sign at which the years fell away: 'Jumble Sale 2 pm'. Well, bu now it was 2.30, and any self-respecting jumbler would have been and gone, but this was still too good an opportunity to miss, to show Michelle another Great British Tradition (waning). She was delighted to acquire a new teapot for Shilling (indeed, for a shilling, well, 5p) with a brace of plates and cups thrown in for another 20p. I meanwhile got a mirror, a rug, a toffee tin bearing an Amsterdam canal scene, a quantity of rag for rug making, and some books. Ah well, old habits die hard. 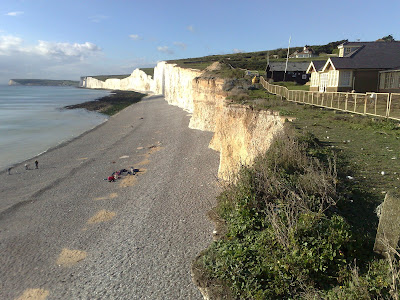 Then it was off again to Birling Gap, where the old Birling Gap hotel has been taken over by the National Trust. We oohed and aahed at the white cliffs for a bit, and at the gardens still disappearing into the sea, before retiring inside for a pint of Beachy Head ale from a local micro-brewery whose name eludes me. Then onwards and upwards, to Beachy Head itself, to the very summit this time, which is actually well away from the cliff edge. It was sunny but windy and I tested out my US military parka for the first time (it was pronounced the genuine article by Bill, and a snip at £30) and found it most gratifyingly protective. While Michelle and I braved the elements, Bill and Jim retired to the car with an ice cream. Boys, eh.
Next, back to Newhaven, to play host at our house with a traditional offering of home made scones with jam and cream, with tea in cups and saucers, followed by fish and chips and... oh, is that more beer? 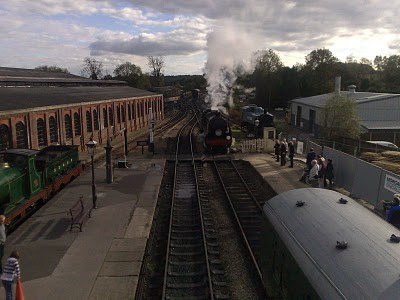 Up bright and early on Sunday, and a trip to the Bluebell Railway at Sheffield Park. The first carriages we went in weren't all that old; though dating perhaps from the twenties they were still the stock I remember from my childhood; the worn upholstery so familiar, but the seats unexpectedly soft and springy. The lights (I'll post a picture another time as they're on the other camera) were, I'm sure, exactly like the ones I should have on Chertsey. For the return journey we went and sat in a newly restored 1951 carriage - the comfort of which puts modern trains to shame. At Horsted Keynes we stopped for a look around the beautifully nostalgic station, at the buffet, the enamel signs, and the other locos and carriages, some of which seemed to be being used for filming something.

Horsted Keynes (pronounced as in Maynard rather than Milton) used to be the end of the line when I was a child, but the railway now continues to Kingscote, where there is an ice cream kiosk, a field, and a second hand book stall where I bought a rather nice old wooden box; a bit damaged but not bad for two quid.
Then back again through the not very exciting Sussex countryside (although the waether and the autumn light did it proud) and to the inevitable pub; after a fair bit of research (Dr. Duct would have been proud of us; in fact I did suggest to Jim that we could skip all the internet nonsense and just ring Craig up and ask him) we settled on the Rose and Crown in Fletching. We had also considered the Griffin in Fletching (very expensive!) and the Blackboys Inn in Blackboys (love the name, but before anyone gets too excited, it dates from the time when the area was a centre for charcoal burning); we actually rang them up and it sounded as if selling us some dinner would be a bit too much trouble for them to contemplate. The Rose and Crown proved to be a good choice, serving a lovely Sunday roast (opportunity to explain the mystery of Yorkshire pudding and what it's doing in Sussex), with Harveys and London Pride and excellent service from nice friendly helpful people.
The weekend was over and I had to be back at work on Monday, but the fun wasn't quite over yet. Before getting on my train I joined Jim in Lewes to pick out some little gifts to remind Bill and Michell of their stay. Our port of call of course had to be the Harvey's shop - where else, for something light and easily packed (so no beer, sorry) - t-shirts, shopping bags and souvenir books. Then I went off to the station and Jim headed over to the Dorset, where he picked up our guests for a day touring Lewes itself. Among other things they made sure to take in the Lewes Arms, epicentre of the legendary Greene King boycott.
It must have been the busiest weekend I've had for a long while, but it was great fun, not only spending time with Michelle and Bill, but actually taking the trouble to look with new eyes at what's on the doorstep. Can't wait to do it again - after I've had a bit of a rest!
Posted by Sarah at 15:35