Winding in the rain

Today we did finally make it up to check on Chertsey - albeit as briefly as you can get away with when it's a 400 mile round trip. We had waited in vain for the weather to improve, and given the heavy rain decided that we really had to go and make sure that the pump had been working and that all was otherwise well.

The visit didn't get off to the best start, with the discovery of a (very damp) BW ticket firmly attached to the boat... I shall regale you with my further Adventures in Licencing once I have spoken to the various BW bods involved tomorrow.

The hold also looked suspiciously wet, with water well over the floors in the back end and extending about half way along the boat. More than there should have been if the pump was working, but less than I'd have expected if it wasn't. The mystery was solved when Jim discovered that the hose had worked its way loose and found its way back into the hold, so the pump had, for a while, been recirculating the water. Amazingly though this hadn't significantly drained the battery, so things were looking up. My patent rainwater diverter (pictured below) also seemed to have done us proud and prevented the entire rainfall landing on the roof of the adjacent building ending up in the hold. 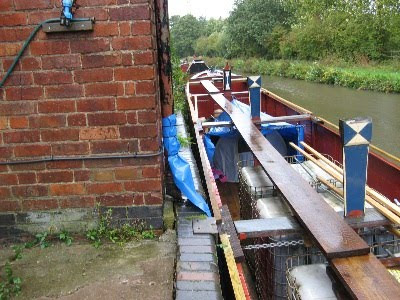 In order to charge the battery, in the end, we did have to wind. There were other disadvantages to facing the other way too, mainly that it wasn't possible to get directly onto the back of the boat. So we took the polythene sheeting off the engine room (it too had been very successful in keeping the rain out), fired up the engine, and reversed to the marina, winded in the entrance, and reversed back again. By the time we had achieved this we were pretty much soaked through.

Tying up on this moorning is quite fun, as one end of the boat is against the side of a building, with no means of stepping off; neither is there anything particularly prominent to catch hold of or lassoo. What it entails is me (in this case) standing on the front with the cabin shaft and using it to hook the (knotted blue) rope we've left neatly coiled in an elder which is growing out of the side of the building, and tying this round the t-stud. The other end of the rope is attached to a chain which is somehow attached to the wall. At the other end, it is possible to get off, but again we leave the rope attached to the bank because it's looped tightly behind what appears to be a bit of reinforcing steel holding up the wall. Still, we seem to have it down to a fine art now.

So Jim set up the charger, I dried everything that had got wet in the course of our short outing, and positioned a vital bucket under the bull's eye, which is still dripping, and no sooner was that done than we were off again... when what I really wanted to do was light the stove and give the old girl the TLC she deserves.
Posted by Sarah at 20:55