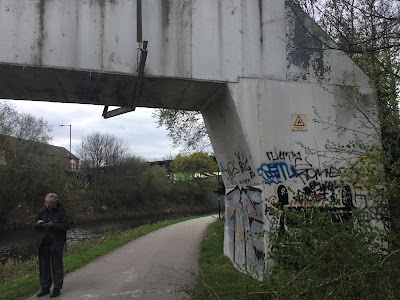 When I last posted about bridge numbering on the Sheffield Canal, Paul from Waterway Routes left a comment, inviting me to get in touch, which I did, and Paul very kindly send me a copy of his SSYN map, which I have to say was splendidly clear and easy to read. More on bridge numbers later, but this post is going to become the third in a series which should probably appear at 5.30 a.m. on Radio 4, called Walking the Sheffield Canal With... Because it quickly transpired that Paul was planning to visit Sheffield very shortly to check on whether any updates are required for the maps he so painstakingly compiles, and we then established that we would both be more than happy to walk from Sheffield Basin to Rotherham and then come back on the tram train, so yesterday that's what we did.

I must confess I hadn't previously paid a great deal of attention to Waterway Routes - I recalled Halfie having given them a trial a while back but it all seemed a bit techie for me. However, Paul has now given me (my first ever freebie in thirteen years of blogging!) a copy, and having re-read Halfie's glowing review of the Memory Map version I'm so keen to give it a go that I may well buy an Android tablet for that purpose (if I understand Paul correctly, it's a lot harder on Apple devices, and it would be good to have a less expensive device (and incidentally one that doesn't actually, technically, belong to work) to take boating). So I will try it and report back, and of course I shall be fearlessly honest, but I must be honest up front and say that Paul is such a nice chap that I really wouldn't feel able to say anything bad about it even if I thought it, which I'm sure I won't - it looked brilliant on Paul's phone. I think the biggest problem I am likely to encounter is installing it, and then finding my way around it - but I'm not a complete IT dunce, as long as I have (a) time to play around, and (b) the motivation of actually wanting to achieve some outcome from it. I have, after all, by those means become (probably) the second most advanced user of Google Drive in the whole department :-)
Posted by Sarah at 06:00