Sheffield famously has seven hills, and five rivers. Four of the rivers are easily seen, and I've walked alongside each of them at some time, sometimes for yards, sometimes for miles. The fifth I have probably walked over, maybe heard, but until last Sunday, hadn't seen. Ironically, Sheffield's least visible river is the one that gave the city its name. 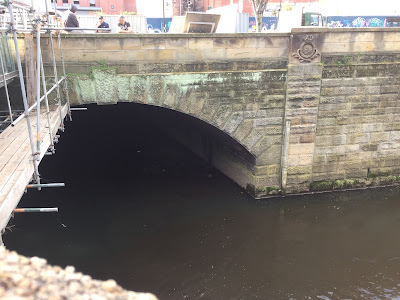 Here is the River Sheaf, emerging form its culvert to join the River Don at Blonk Street Bridge, not far from the canal basin.

I said it's ironic, but there's a certain logic to the fact that the river that founded the city was ultimately swallowed by it. Slightly more of it may soon be revealed, however.

Having signed up again for the waterways websites hit parade (of which more tomorrow), I feel honour bound (and indeed contractually bound) to write about more wet stuff, so it occurs to me that getting out and about along and above Sheffield's rivers could be a nice little sideline.
Posted by Sarah at 06:00