We made an early start this morning to get over to Alvecote for the bi-annual ritual of Sorting Out The Cloths. This is nearly always done in more of a hurry, and to less of a standard, than planned. Last autumn's efforts were good ones, and the cloths stayed in place all winter, and as it was clothed right up to the engine room bulkhead, hardly any water got in. There were a couple of spots where it worked its way through quarter inch gaps in the gunnels, but overall I was very pleased.

So this morning we arrived armed with the new set of topstrings, the trusty roll of translucent scaffolding sheeting (I can now report that you get more than three boat's worth out of a £70 roll, and each lasts a couple of years), and a secret weapon. 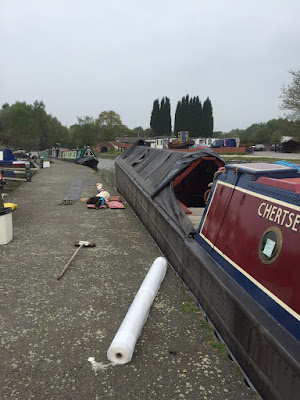 So first, Jim climbed onto the top plank and untied the old topstrings. The plan was to use these as the new sidecloth strings, although it would have been nice if I could have given them a wash first as they were a bit green. Better than blue though. 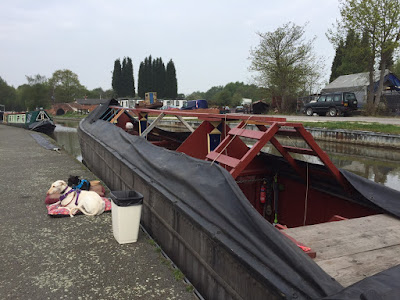 Then all the sidecloth strings were removed and ceremonially thrown in the bin. I may go back next weekend to sweep up all the mess they have left. 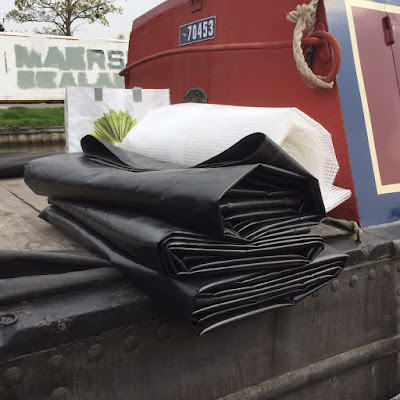 Having tied up on the outside of the marina there was plenty of space to lay out and fold the topcloths. I folded them in thirds lengthways first, then rolled them (only flat, if you see what I mean). This should - as long as we remember - mean that they can easily be centred on the top plank and unrolled so that they are in the right place when we come to put them back. I would have liked to have given them a scrub, but was afraid that they might not dry in time. The temperature was just right. Too hot, and they're uncomfortable to handle; too cold, and they're awkwardly stiff. 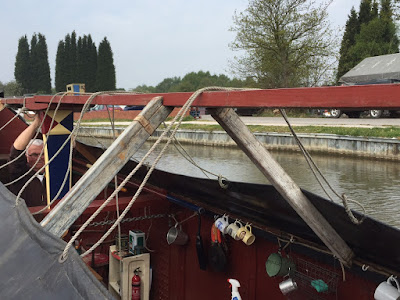 Then we re-tied the sidecloths using the old topstrings. I went through the boat feeding them through the eyelets, over the top plank, through the eyelet the other side and back over the plank, while Jim followed tightening and tying them. This is basically what holds the whole structure of planks, stands and 'uprights' (those bits at 45 degrees) together and makes it rigid and stabe enough to walk on. 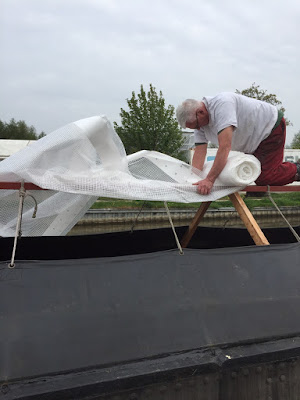 Then Jim climbed up again with the translucent sheeting which I had cut to length, folded in thirds, and rolled up ready. I reckoned that with a trip up the Rochdale looming, any potential source of stress that can be removed is a good idea, and one thing I like is plenty of light. We haven't had the boat clothed solely in translucents since 2015. 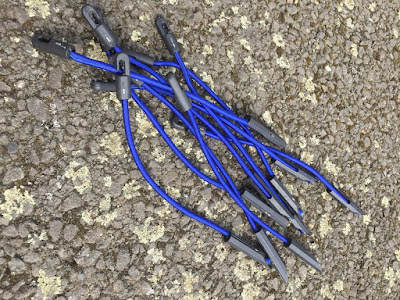 Then out came the secret weapon. Jim recently bought a new roll of translucent sheeting, and with it came 100 of these things, which I shall call scaffolders' bungees. The pointy end stabs through the reinforced edhe of the sheet and opens up to form a t-bar behind it. The hook on the other end just fits over a gunnel ring. 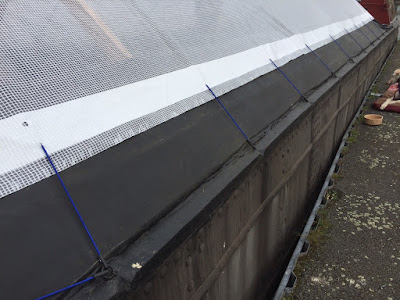 They were the perfect length (had they been too long, we could have used the second, higher, row of holes). What's more, standing on a chair inside the hull, Jim could reach over the sidecloths to attach these on the offside. It was then a simple matter to give it a bit of a tug and a straighten and do the bankside ones off the bank. 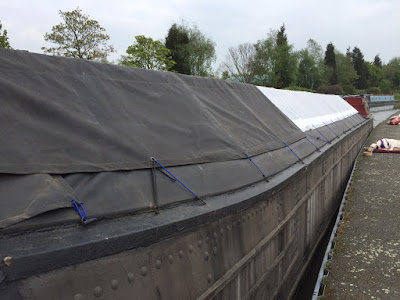 Where a shorter length was needed, I tied a knot (or two) in the elastic. Or as you can see in the foreground above, looped it through more than once. This is holding down the strip of cloth attached to the deckboard that keeps the rain out of the cratch (and thus Jim's bed). I ran round delightedly deploying these in all sorts of places, including tying down the rolled up sidecloths at the back end. It's brilliant that the elastic is something like the blue of Chertsey's pauntwork (rather than orange, say) so it really looks quite smart. It all seems very secure so guess what - we decided not to put the topcloths back on yet after all. We may do it when we get to Hebden Bridge, or we may do it for Braunston, or we might end up not doing it at all... Whatever, for the time being, the lovingly (and hurriedly) made new topstrings are still sitting in their bag.
Posted by Sarah at 06:00