Is it a tram? Is it a train? No! It's Supertram Tram-Train!

Paul confessed to me on Sunday that when we were tentatively agreeing to meet and undertake our respective surveys of the Sheffield Canal in tandem, he was unsure how he was going to break it to me that we would have to travel back on the tram train so that he could add it to his railway experience collection, and thus was relieved when I suggested that no day out to Rotherham would be complete without such a trip. 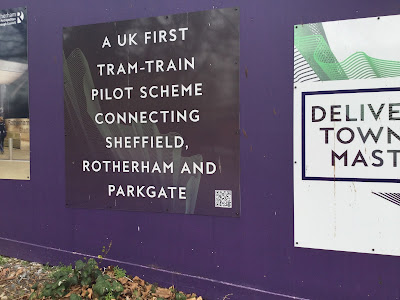 The tram train (or Tram-Train) only started running last October, which represents pretty early adoption for me. It's a tram, that runs - for an admittedly short distance - on a railway track. This means that it has to be a special tram, just that bit tougher than an ordinary tram, and that it has to have special signalling, because it's not nearly as tough as an actual train and thus has to really avoid having a train running into the back of it.  (Paul explained this to me, along with what the signals we saw along the way meant.) 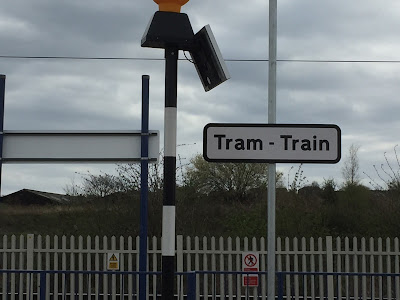 The tram train starts at Rotherham Parkgate, hidden round the back of a shopping centre. The SSYN towpath delivered us with ease to Rotherham Central station, but we had no hesitation in agreeing that we needed to start at the very first/final stop, so spent another half hour or so trying to find it. 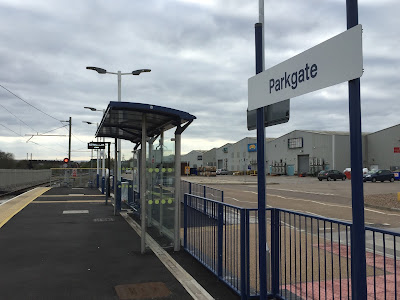 There are three tram trains an hour, but not at regular intervals - they have to fit in around the other (real) trains. We arrived with 23 minutes to wait (not an hour and 23 minutes, as it appeared, the next tram/train indicator being on BST but the clock display still showing GMT). It was a pleasant enough and quiet place to wait. Very quiet. 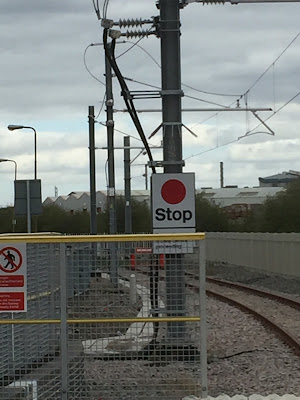 You can tell which are the tram tracks, because round these parts they're the only ones that are electrified. 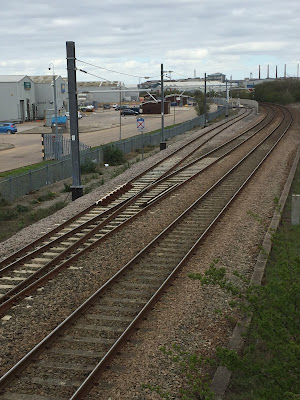 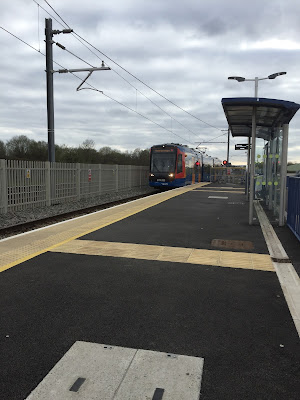 I've seen these new models plenty of times in the city centre, but not here doing what they were built to do. So on we got, and nabbed the best seats directly behind the driver's cab (there was at this point, only one other passenger) which gave an excellent view both of the inside of the cab and the controls, and also of the track ahead. 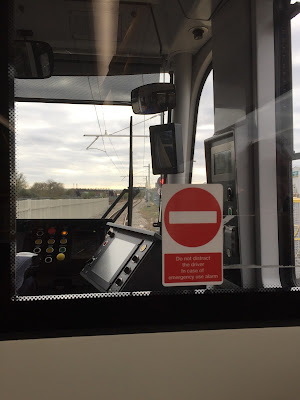 As a fully integrated part of the tram network, a single ticket to nearly all the way home, including a change, was £2.50. 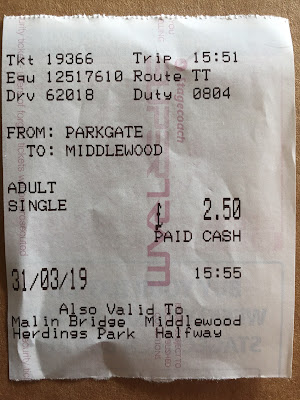 The conductor brought the driver a bar of chocolate (he seemed quite touched by the gesture, and put it aside for later) and then we set off.  It was as well that we'd taken the trouble to start from Parkgate, as we were very soon at Rotherham Central, then soon after that we passed a sign saying 'trams only' then one that said something about line of sight operation (I forget the exact words, but it meant that there were no more signals), and by the time we got to Meadowhall/Tinsley South, we were just on an ordinary tram.

I could have stayed on the tram-train tram until it terminated at Cathedral, but a single ticket doesn't allow you to double back on yourself, so Paul needed to change at Fitzalan Square/Ponds Forge for his connection back to the (Midland) station (well, we kind of started from Victoria...) so I got off there too, and almost immediately, along came a yellow line for Middlewood, so I quickly said farewell to Paul and thanks for his excellent company, and within another five minutes I was making the final climb home after an absolutely splendid day out. I do like the tram.
Posted by Sarah at 06:00