A local boat for local people 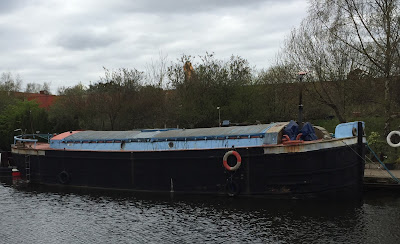 I wouldn't like to swear that this was a Sheffield keel (or Sheffield boat) but it's certainly the nearest thing I've seen on my travels so far. I realised in conversation with David the weekend before last that I know next to nothing about these boats, and now I'm here I really should, so I've started giving myself a crash course, starting with Paget-Tomlinson's British Canal and River Craft (1979).

What I learned first from David, and have since built upon, is that the term 'keel' actually denotes the kind of sailing rig that the boat would have had, rather than actually telling you anything about its hull. They come in various sizes, with the Sheffield size being the most common.

So have the locks suddenly got a foot and a half shorter? Is this why they felt obliged to use a cut down large Northwich instead of a Sheffield boat to lead the bicentenary parade? I was speaking to the lock keeper on Sunday (of which more, perhaps, anon.) Maybe I should have asked him. Or maybe not.
Posted by Sarah at 06:00