'It's how you knew you were home' 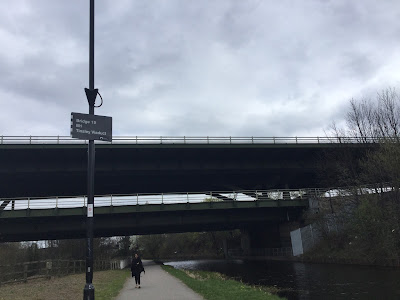 Had I a better sense of orientation, I might have photographed their absence. As it is, with my two terrible, off-horizontal, shots, I don't think I did. 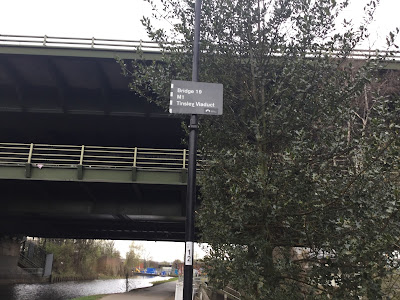 The Tinsley Viaduct is interesting enough in itself, a double decker road bridge, built 1965-68,  carrying the M1 (above) and the A 631 (below) across the canal, the river, the railway and the tramline.

When I worked in Huddersfield, before I had ever visited Sheffield, on the very rare occsaions I travelled by car I would look down from here at the city nestled in its basin of river valleys, and it was characterised by the glint of Meadowhall and the brutal, beautiful mass of what I now know to have been the Tinsley Cooling Towers:
These were built in the same year as Chertsey (well, 1937-8), providing additional capacity for the 1921 Blackburn Meadows coal fired power station, and as such were very early examples of the hyperbolic design that is now the familiar - even iconic - symbol of a power station.

Blackburn Meadows was closed in 1980, and most of the site cleared. The towers, however, couldn't be demolished without risk to the viaduct, so they stayed for nearly another thirty years. Shorn of their function, they became a landmark - towering, in a more literal way than many of their counterparts, over their surroundings.
But following the strengthening of the viaduct  in 2006, the towers' owners, E.ON, decided to demolish them, and the decision was carried out - in the face of much local opposition - in the early hours of August 24th 2008.

One person described them to me as 'Sheffield's Angel of the North'.  A Yorkshireman of my acquaintance, who, if not exactly taciturn, is certainly not given to displays of emotion, told us after a couple of pints how upset he was when they were demolished, saying that seeing them from the motorway was 'how you knew you were home.'
I must confess that it was a long time after arriving in Sheffield that I noticed that those massive symbols of the city were no longer there. It's like I said the other day - you turn your back for a moment...
Posted by Sarah at 06:00