I'd persuaded Jim that we shouldn't leave first thing on Tuesday morning, as I really wanted to visit Walsall's New Art Gallery, under whose flank we were moored. Naturally this was to soak up culture, expand my knowledge of the visual arts, and refresh my jaded eye with some challenging modern sculpture. Also, I wanted to get some postcards and a mug. My last few trips have yielded a souvenir mug - we were given a commemorative Basingstoke Canal 50th anniversary mug last year, and the year before I'd bought a Bugsworth Basin one. In 2015 the Braunston show did a decent giveaway one. It was getting to be a bit of a habit, so I thought a Walsall New Art Gallery mug would be a fitting memento of this trip. Sadly it was not to be - while the gift shop offered a few mugs, they were all generic arty ones, not Walsall specific ones. Should have gone to the Leather Museum I guess.

Other than the rubbish gift shop though, the Walsall New Art Gallery was pretty good. I'm not a great connoisseur of the visual arts, but I like a mooch round a gallery as much as the next person, and I thought the Walsall joint hit just the right balance between accessible and condescending and - although you might (I heard some comments) not think so from the outside - it's a lovely gallery space. 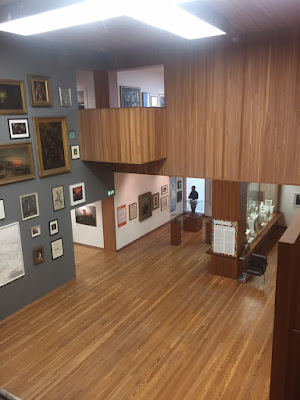 The whole Walsall Gallery thing started in 1892, when the local council decided that as advances in local government had improved citizens' physical health and wellbeing, so they should attend to their 'education and happiness'. The beginnings of the gallery's permanent collection were pulled together with donations from the town's wealthiest. This collection grew to some 3,000 works, and was augmented by significant bequests, so that the gallery now houses a large number of Epstein bronzes, as well as works by Picasso, Van Gogh, Monet, Degas and Lucian Freud. The statistic that amazed me is that the collection has doubles since the gallery moved to its millennial home seventeen years ago.

Admission is free, as befits an institution dedicated to the public good. One of the very informative free leaflets tells me that the gallery is 55% funded by the Arts Council and 'self-generated income' (more mugs in the gift shop and I'm sure they could increase that) with the remaining 45% coming from Walsall Council. And that's the worrying part. My third reason for being determined to make this visit was the fear that it might not be here next time.

There didn't seem to be any signs barring photography, so here are a few of my favourite exhibits. 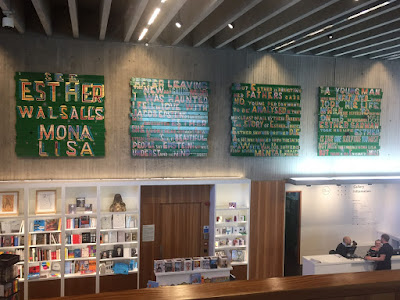 There was a fair bit of Bob and Roberta Smith, including in the gift shop. I never did track down the Epstein sculpture to which this one refers. I discovered and tried the panorama facility on my phone on one (or it might have been many) of them, which filled a small room.

It maybe doesn't come out too well in a narrow column. Here is a snapshot of part of it: 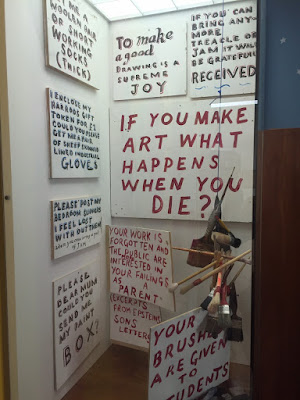 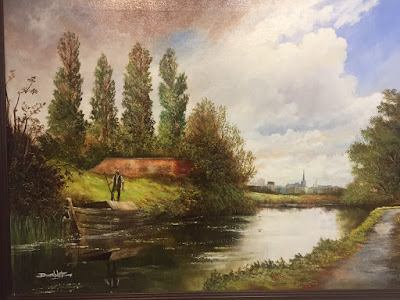 A lot of them wouldn't photograpg because of reflections off their glass, but this is a good example. Despite looking nineteenth century, Walsall from the Birchills by Dennis Dumbleton was painted around 1990, and what looks at first glance like a man working a narrow boat turns out on closer inspection to be a man standing by a rotting hulk. 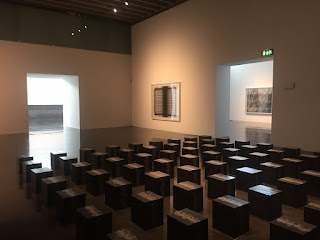 Finally, the gallery was hosting an exhibition of works by Idris Khan, including this collection of 'sandblasted oil-sealed blue steel cubes, dimensions variable'. They didn't do much for me, but a lot of work had clearly gone into them.

And thus concluded my second ever trip to Walsall. Next... the delights of the Walsall Canal.