I fear I may subject you to a few house-related posts over the next few months.

I got the keys to the house on Saturday, and popped in a couple of times to get the feel of it. All in all I am very pleased indeed - I know it will be a fantastic home when it is finished (and there are just under three months to achieve that as I have already given notice on the flat). However, there are a few jobs to do first. Jim arrived late last night and this morning we couldn't wait to get over there for a good look.

The first thing I wanted to investigate was the dining room floow, which sloped suspiciously. The front room floor - over the cellar - has recently been replaced, and we could see from underneath that it was sound. But the back room was another story entirely.

Before we'd even had a cup of tea Jim had taken up a fair portion of the cheap laminate flooring and almost immediately I put my foot through the floorboards underneath, closely followed by Jim in a different place a few minutes later. Fortunately, I wasn't carrying a cup of tea at the time. The floor was in every bit as bad a state as I had expected - wet rot, dry rot and many other varieties of sinister and mysterious fungus lurked beneath floorboards that were in one corner actually sodden. 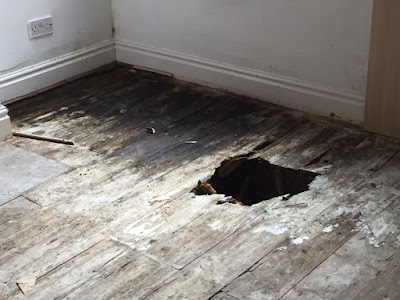 Jim wasted no time in taking up the floorboards 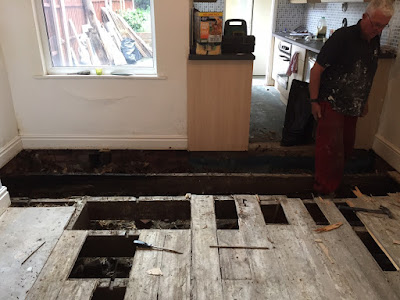 And then removing the rotten joists - they were incredibly light; just cellulose shells 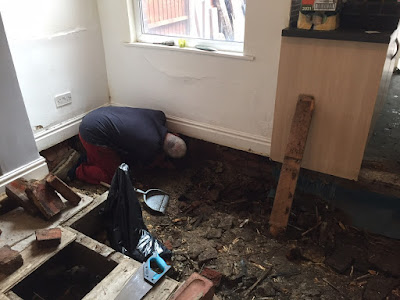 About a foot below was the dirt floor 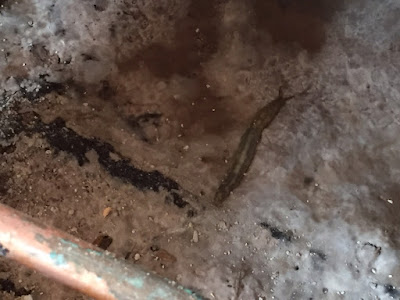 And some interesting inhabitants. 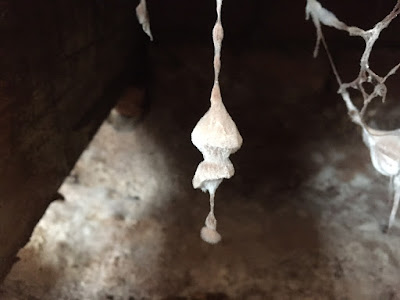 Dry rot I can recognise, but what is this revolting film of fungoid accretions? 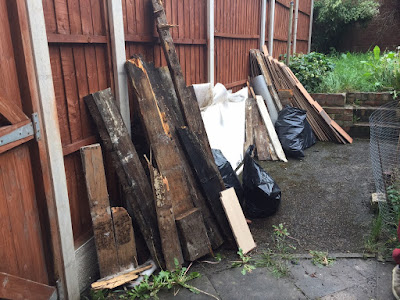 Here's some of the timber we removed - with the laminate flooring in the background. 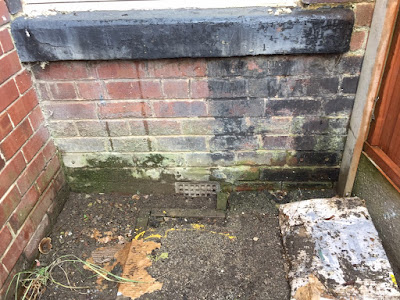 The problem is at least in part due to the ground having been concreted and tarmacked nearly up to floor level, and the airbrick being completely clogged up, combined with a leaking gutter above (incredibly, the house has wooden gutters!) 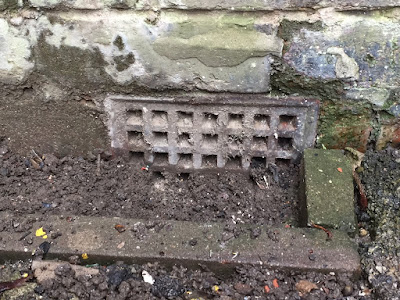 So with the worst bits removed and the air brick cleared it is getting a chance to dry out. All the floorboards will be coming up and out and possibly more of the joists depending on how far the dry rot has got, and Jim is also going to break up the concrete and clear an airspace outside. The plaster will be coming off in the worst corner too.  We'll replace the joists with tannalised wood and slosh about vast quantities of noxious chemicals. Very similar to what we did in the Newhaven house twenty years ago, but on a bigger scale. One of the good things about knowing Jim has been learning how a house is put together, meaning that this wasn't as terrifying (dry rot!!) as it might have been.

I took the opportunity to look under the carpets upstairs and was delighted to find the boards there looking very sound, not even a hint of worm. Not bad for a house built in 1893.
Posted by Sarah at 20:40