I am sorry that I described Saltaire Station as 'characterless' here. I confess I didn't really look at it as closely as I might - and should - have done. I was so taken aback as so many people getting off the train and having to readjust my expectations (still unconsciously based on the freezing rain of the weekend I had originally planned to go) that I just sloped off. I intended to come back later, of course, but I should have learnt my lesson by now - do it when you first think of it.

Anyway, David very gently took me to task for my rash and dismissive description. He points out that when the station was re-opened in 1984, the original buildings being long gone, 'rather than erecting a simple bus type shelter on each platform (the norm on the other new stations in West Yorkshire), they went to he expense of having stone buildings in a vaguely similar style to the village,  plus electric lighting in period style gas lamps.'

And he sent me a photo which he took in 1959, six years before it was closed, 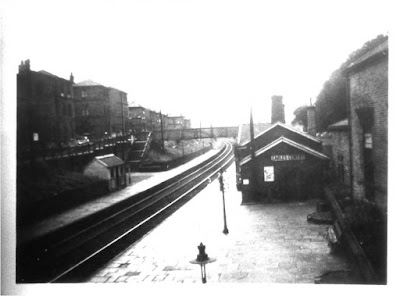 pointing out that by then the stone shelter had already been removed from the down platform, and been replaced with a second hand wooden hut.

David - who grew up in Shipley - also filled in some details about the Shipley Glen Tramway in the 1950s: 'at the top of the Glen Tramway there used to be a small fairground where we could play on slot machines, ride on a gondola with gondolier (really),  a miniature railway, and other amusements'.

I am more than delighted to set the record straight - and thanks again to David.
Posted by Sarah at 20:22