And so back to Brownhills. At any HNBC gathering, it's always a toss up for me whether the greater event is the quiz or the auction. I generally tend to come away from the auction with more prizes. Last year we bought only one thing, and spent rather a lot, but came away with a fabulously frightening cabin shaft (ex-Val and Mike). One of my best purchases was my £8 (they thought I was mad but I don't have any regrets) British Waterways issue holdall, which I proudly use to transport clothes and linen to and from the boat.

At Brownhills we actually had a fair bit of tat to contribute to the auction. Being the sort of sad case that I am, I made a note of what each item fetched, and calculate that the Lichfield and Hatherton benefited to the tune of £66.50 from our old crap largesse. One of the more surprising items was the FMC bar towel that I bought at Bill Fen many years ago, and upon which my tea mug etc. used to sit in the office. Following my reorganisation into a smaller space, and clearly having no place on Chertsey, it became surplus to requirements, and fetched £17. I always thought josher people had more money than sense. I wouldn't pay that even for a GU one. Two large tins of unbranded chilli con carne which Jim bought in an unguarded moment, bundled in a lot with the half bag of house coal we found abandoned on the bank went to the person I predicted it would.  My soot stained but still rather nice Le Creuset blue enamel kettle, bought when I went to live on Andante, failed to attract any bids worthy of its quality, and was bought in a sympathy bid by the auctioneer. Well, I have to admit that the whistle doesn't work all that well.

My purchasing strategy generally serves me quite well and (especially in the absence of Jim) stops me getting too carried away. I basically go round making a note of every lot I'm interested in, and what I'm prepared to pay for it. Having it written down, I find, does help make one's boundaries a little firmer. This is one lot that went for more than I was prepared to pay: 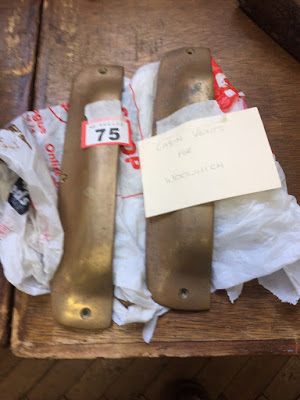 Largely because I knew I would never fit them, and if I wanted to, I already have one, more authentic, steel one, which we haven't fitted in seven years. I also let slip away from me many yards of cotton line, which didn't meet its (undeniably reasonable) reserve. This suggests that I don't feel quite ready yet to start splicing fancy topstrings for the cratch.

So what did I get for the grand total of £8 that I spent this year? Well, £4 of it went on the aforementioned empty Morris's oil tin (which is now no longer empty; having checked that it was clean, Jim has transferred our oil from its previous unsightly plastic containers). The remaining £4 bought this little lot of lots: 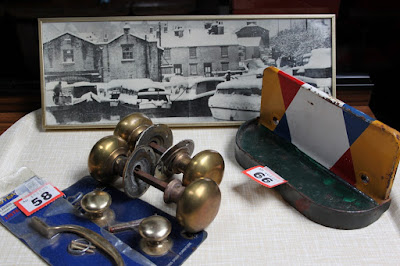 Now, the only one of these I actually planned to bid on were the door handles, which I fancied for my new house. They were a bargain at a pound. The brass handle will find a role on the winter chimney, which currently doesn't get much use because it has no means of attaching a chain. I had quite fancied lot 66, described as a 'Roger Fuller boat step' but not enough to put it on my list. For £2 though, it will make a mighty fine door stop or, as it is currently deployed, bookend. It's jolly heavy. That just leaves the framed photo of Whalley Bridge, which was my sympathy purchase when no one else was willing to bid a pound. All in all, another most productive and frugal outing, and it must be admitted, a more satisfying outcome than the quiz.
Posted by Sarah at 19:00