Chertsey in the dry dock

We drove down to Grendon at lunchtime today to see Chertsey in the dry dock. We didn't actually get to go down and poke about - there were a good few inches of water still to go - but from where we were looking, things looked fine. 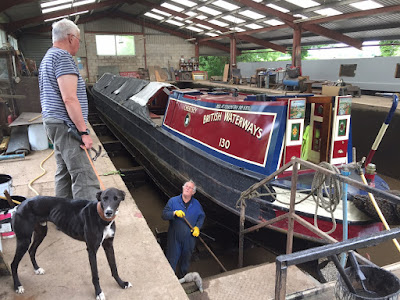 The blacking certainly seems to have held up well over the last seven years - but as it was three coats of Coflex brushed onto shotblasted bare steel, I'm not entirely surprised. To have had Coflex again this time would have been prohibitively expensive so I'm having the Jotul stuff as recommended by Laurence. 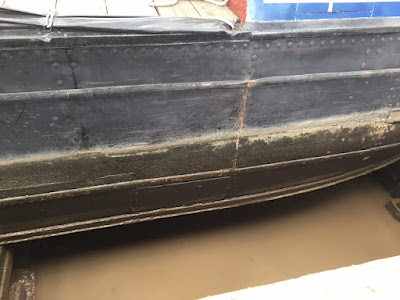 What we did notice this time, that had either slipped our minds or escaped our notive previously, was how far the 'new' (1980s) baseplate extends - it could be that this is where we have mysteriously and invisibly stuck on a couple of occasions. As well as blacking, I'm also having the tunnel bands repainted - in proper scarlet and white this time. Martin meant well doing them in the same crimson and cream as Chertsey's livery, but I never liked it. 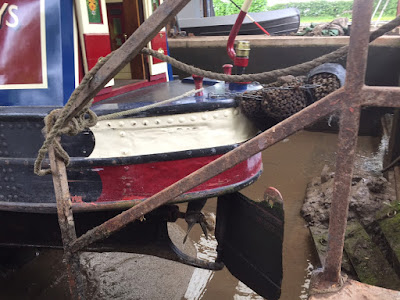 Finally, they're going to repack the stern gear, which has been semi-botched ever since I got her.
Chertsey will be in the dock for a week, and then Laurence is very kindly going to take her back to Alvecote.
Posted by Sarah at 19:00