Following yesterday's post, Joho asked what the hook on the chimney is for. Well, the simple answer is that it's to attach the chimney chain. That, however, merely leads to the question of what is the chimney chain for? Again, the answer looks straightforward - the obvious function of the chimney chain is to prevent the chimney being lost if it should be knocked off, say by accidentally hitting a bridge with it.

And indeed, if I am boating with the cabin chimney on, which I so sadly rarely these days, I do indeed have a chain for that very purpose. It's a plain brass chain and it runs through the handle of the chimney and clips to the ring attached to the cabin top. What it does not do, is attach to the hook - because frankly, that would not give much protection from falling in.

So, the hook is for the ceremonial chain - much like mayors and aldermen (and women), boats like to put on their finery for big occasions (well, OK, some like to sport it all the time. Joshers mostly). 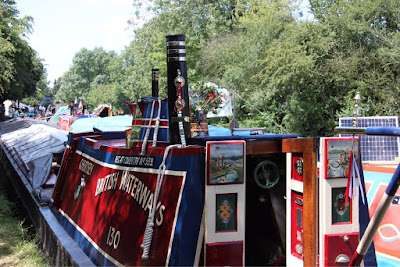 Now, I am no expert, but off the top of my head I'd say there were two basic models of chimney chain. The one everyone covets is the one where each link is a brass clip that attached the handle to a WW2 (I thought 2; Jim thinks 1 - happy to be set right by anyone who knows for sure) gas mask case. These were salvaged and put together by the boatmen. The other sort - of which Chertsey's is an example - originates from the same source as the horse brasses which usually ornament the chimney chain. (I found mine in an antique shop in Ely.) This presumably arose inevitably from the connection with horse-drawn boats and continued as a form of nostalgia. The next question of course, is why all the brass?  Not just the chains and fittings, but completely non-functional items, like the row of knobs inside the back cabin next to the stove. And the answer is... in order to polish it; to have something on which to bestow your pride.

Here is a selection of chimney chains at Ellesmere Port in 2009.