At the HNBC AGM

And so it came to pass that yesterday I attended the HNBC AGM for what must be around the dozenth time.

Gifford won the Keay award, and Corolla (whose restoration's early beginnings we witnessed at Stretton, oh so long ago), the Hemelryk.

I was unable to source a copy of Hadfield's Yorkshire and the North East, but did get a not-too-old Nicholsons (my current one being on the boat) to accompany me on my next bridge-number-checking foray of the Sheffield canal. Jim also purchased a copy of The Twilight Years of Narrow Boat Carrying: Photographs from the Mike Webb Collection - with captions and commentary by Pete Harrison, who was in attendance for the first time in many years.

Mick on Cassiopaeia returned the handstart decompression widget that he has been copying for Aldgate, and which he has repaired, and I took delivery of two excellent chimneys from Andrew on Dove - a austerely plain engine pipe, and a cabin chimney as brassy and beautiful as anyone could desire. 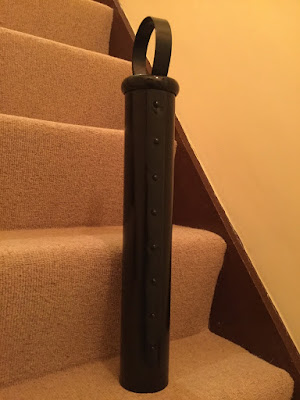 Andrew's handiwork is outstanding, and while I'm honoured to have had only the second cabin chimneg ever made by Michael Pinnock, now somewhat showing its age, this new one is in a different league entirely. 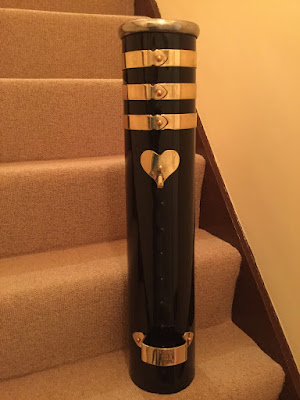 I asked for the hook to be a heart to echo the one on the slide. The brass on this is really heavy and thick; the overall chimney so much heavier and more solid than the old one.

At the AGM, most of the officers were re-elected to their positions, and there were no contested elections. It was agreed to raise the subs to £20 a year, as the Club made a slight loss on revenue last year, largely because the shop's amazing contribution has been slightly less amazing.

The afternoon - and evening's - entertainment was provided by Eric McDowell, who related 'yarns' of his early days of lockwheeling and helping boatmen, through to his involvement with Three Fellows Carrying on the lime juice. He had some wonderful photos, but I'm afraid his delivery was rather slow and he didn't get to the end of the story before we had to vacate the hall.

I also took the opportunity to catch up with a number of the people who, I hope, have become friends over the past decade or so, and others of whom I am still in awe. I finally spoke to Nick Hill about my ambition to recreate Chertsey's final commercial run for its fiftieth anniversary next year, and have made plans to walk the Sheffield canal again, this time with someone who hasn't visited it since the 1970s, go to an organ concert, and attend a model railway exhibition in September.

There was plentiful cake, in which I over-indulged, and the tea was drinkable (just). Whittington village hall is an excellent venue. Once again, it feels as if the baoting season has just begun. Today, as we pore over CanalPlan and my holiday calendar, we shall see how it might or might not unfold.
Posted by Sarah at 06:00