So, yesterday I managed to walk ten miles, at least if my phone is to be believed. Most of them were along the Sheffield Canal again. This time I'd arranged to walk it with David Lowe, and airily suggested that I'd leave the car somewhere near the Basin, and then walk up and meet him off the train at Meadowhall. We'd then proceed to the bottom lock before turning round and walking back to the Basin.  In the event, all went smoothly, but only because I'd allowed a ridiculously generous amount of time. Some of this was accounted for by my detailed audit of bridge numbering (of which more tomorrow) but most of it was Getting Lost in Meadowhall. Honestly, if there's a single sign in that place indicating the whereabouts of the Interchange, I certainly didn't see it. It's de rigueur round here to refer to the place as Meadowhell but that doesn't stop people flocking there in their thousands. 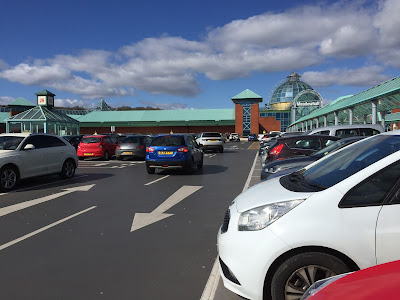 You can see it from miles away, glowing and glittering, just, I imagine, as Christminster must have appeared to Jude. It's like a cathedral of consumerism and the Crystal Palace rolled into one. Naturally, getting to the Interchange involved going through Marks and Spencers, and getting thoroughly disorientated in the process. But I didn't buy anything.

I finally arrived at the Interchange just a couple of minutes after David's train got in, and we decided that the simplest thing to do, rather than try to retrace my steps, would be to get the tram back one stop to Tinsley. I suppose I effectively fare-dodged, as the conductor hadn't got to us before we were there, although it was in fact a fair few minutes. David was excited to see the junction where the tram train comes off. From the Meadowhall South/Tinsley tram stop (they do seem to have quite unnecessarily complicated names, some of them - for example, my local one is Langsett/Primrose View - but there's no other Langsett or Primrose View... anyway, I digress) it was a matter of moments to regain the towpath, and we had a very pleasant stroll, the spring sunshine only slightly marred by an occasional biting wind. We talked of many things, one of which was David's memories of boating on the canal in the early 1970s, with his then relatively newly-acquired trip boat Apollo, which he still owns, starting with the IWA rally in 1971 which probably kept the canal open.
Posted by Sarah at 06:00