I had begun to doubt whether we would make it to Hebden Bridge, in light of the prolomgued stoppage at Marple, as our timeframe was already very tight.

However, following the AGM - at which Enceladus Sarah persuaded me that it was worth going for the plaque alone - I sat down with my work calendar, a wipe-clean wall planner, Canalplan (which just gets better and better) open on the computer, and the convoy dates in and out of Manchester ... 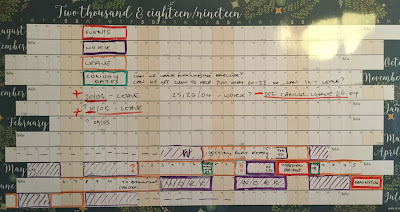 ... And by tweaking and trimming a couple of days here and adding them there, we have something that looks like a plan.

I still have serious reservations, especially about how to keep both Ricky and Geoffrey, with their different needs and natures, both happy and under control. Less concerned perhaps now about the heavy physical work that will be involved, largely because we will be going in pairs, and also because I'm basically going to be steering all the time. As the Boss pointed out, when I sent in my new leave requests, this means I shall be at work for only three days in the month from May 10th to June 10th. It also means I won't have much holiday left for the rest of the year, but apart from that it's almost like old times.

So, got to start preparing in earnest now. Did someone mention new strings?
Posted by Sarah at 06:00