We left Cambridge yesterday morning, with the Ducks along for the ride. Amy, being incredibly assiduous and self disciplined, spent almost the entire trip inside working, while James made the most of the opportunity to steer Warrior - and to check out what Moomin calls the Warrior Warp Drive with James's GPS... while simultaneously playing with the rev counter in the engine room. The speed limit for much of this stretch is 7mph/11kmh so we were looking forward to trying to break it :-).

Well, we almost managed, reaching a top speed of 10.7 km/h (6 2/3 mph), and cruising comfortably at around 10 (6 1/4 mph), but this is nothing compared to what Warrior used to be capable of, before Dark Deeds were done... Last summer, when Jim stopped for a pumpout, a chap leapt completely uninvited into the engine room and fiddled about with the governor. 'It was running a bit lumpy', he told Jim, 'But I've fixed it now'. It's just as well I wasn't there or I would have exploded but I think it was only later the full significance emerged, which is, in short, that Warrior's maximum revs are now limited to less than 800 (so we needn't have bothered with the new pistons after all then, huh). To think what might have been.

We had to be sure to arrive in Ely in plenty of time to revisit the Riverside Antique Centre and the pound shop. Sadly the pound shop really had sold that tin of primer, but the antique centre came up trumps. I finally got my sailor shirt (I got a blue serge one as it seemed better value and more practical; I think it's German. There must be a website where you can look these things up... something for anorak anoraks). We also got what we went back for - this: 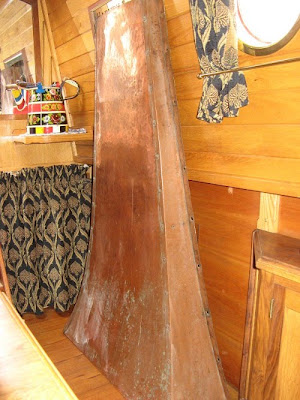 On the label it says 'chimney hood' but to Jim when he spotted it it screamed 'big sheet of reasonably heavy gauge copper that you've been after for years'. So this will be cut up and flatened out to provide a big piece to go behind the stovepipe in Warrior's saloon and hopefully there will be enough left over to do the same for Chertsey's.

Whilst hanging about in the vestibule of the shop waiting for Jim, my eye was suddenly caught by this: 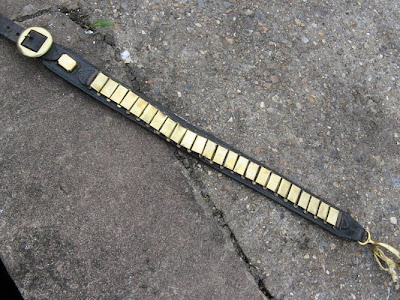 An attractive piece of horse brasswork.... or a chimney chain? Yes, it will be a shame to dismantle the original piece of equipment (whatever it is) but the stitching attaching the chan to the leather is already worn or rotted away (someone has tried to stick it down with silicone, which will be fun to remove) and couldn't be redone without dismantling the whole thing, and I like to think that re-using it like this is part of an honest and respectable tradition. (I await Blossom's verdict with trepidation...)

And finally, I went and fell in love again... this time with this wonderful, silk, eiderdown. 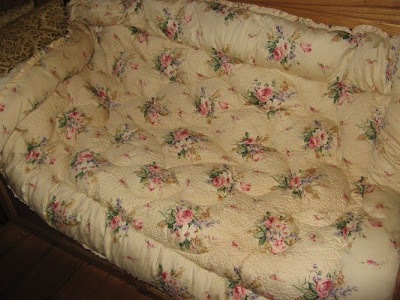 It is so light and fluffy, so beautiful, so redolent of another age. I imagine snuggling up under it, or, as it's only a single, wrapping it around me, on cold or sad evenings... it will be immensely comforting, as well as warm, and far easier to look after than a dog.
Posted by Sarah at 09:35