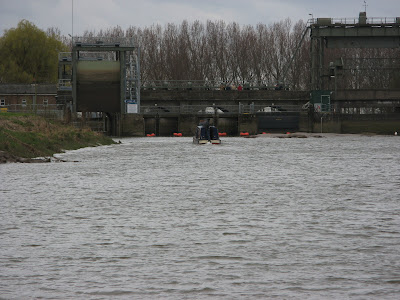 Here is yesterday's news in full. The Great Ouse from Denver Sluice to Ely is indeed very boring. It was also cold and windy, so I stayed inside.

We got the chance to see the shiny new, very expensive looking, lock gate at Salters Lode and all its impressive shiny hydraulic pipework. It was the replacement of this gate that ran over schedule last year. Though it's very shiny and stainless, it has loads of protuberances that it would be easy to get a front fender caught on... the lock is manned, so we must assume that the lockkeeper can prevent this occurring.

We got to Ely mid afternoon and were greeted by the Ducks who took us off for tea at Peacocks, 'Britain's Best Teashop'... or so they claimed. It was incredibly pretty, the Platonic ideal of teashop, but there was a sense that they were doing you a favour be allowing you to be there, and, far more unforgiveable, the tea was weak. Not Jim's - he ordered builder's tea - but my Assam and Amy's Cornish grown tea were both incredibly weak, in as much as they simply hadn't put enough tea in for the amount of water - and Assam, at least, in my view, is not a tea to be drunk weak. So minus points for that, but still a nice experience. Terribly nice, in fact.

As we left we saw the Moomins approaching, and they tied up to the Duck. Long discussions ensued about whether we would all go out to eat together, complicated by the fact that we thought that the pub that did food didn't do beer, and vice versa. In the end off we went first to the Cutter, where the food was reasonable and there was in fact beer - Woodefordes Wherry, Adnam's Broadside and Greene King IPA - albeit very cold. But we were still determined to sample the delights of the Prince Albert which Amy had very selflessly researched for us, despite not being a beer drinker herself. We took a rather roundabout route to find it, which was a great opportunity to see some lovely buildings, including the Cathedral, and when we did, it was empty, the landlord enjoying his dinner - turns out they did do food after all. By this stage we had been joined by Alex, a Canadian scientist Jim met on the Nene last year, and we enjoyed quite a lot of very nice beer, with the Ducks, us and Alex staying on to midnight closing time and beyond. A great night with good company.

Today's plans are to have a wander round Ely before seting off at more leisurely pace for Cambridge. The Ducks and the Moomins have already left, and hopefully we will see them tonight at Midsummer Common.
Posted by Sarah at 10:11