Being crushed to death can seriously damage your health 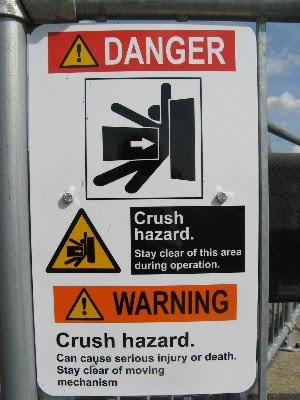 Now we know how the Environment Agency love to terrify us with their warning signs, at every lock (deep water!), pump out (danger of electrocution!) and so on; signs which BW (and this is surely something to their credit) seem to manage perfectly well without, despite their manually operated locks, with their exposed gear, offering far greater opportunities for self-maiming - but this was a new one on me.

At the Relief Channel Lock at Denver (you thought you'd heard that last of that, didn't you) the gates (sorry, doors) are all hydraulically operated, finger-on-the-button-til-your-arm-drops-off, jobs, but they also have beams for, I suppose, when the hydraulics (or the button) break. The bottom end of the lock is surrounded by fencing (presumably to prevent you from accidentally launching yourself into the Relief Channel), so if you somehow managed to insert yourself between the beam and the fence (and this would be quite a feat) while you or (more likely) a.n. other had their finger on the button, you might indeed end up a bit mangled. And (obviously) your head would fall off.

So the EA put up a splendid graphic sign (no doubt aimed at our fellow Europeans from the east of the continent who abound in the area - like the BW one that tells you not to run on the towpath with an unfeasibly large fish under your arm). So concerned are they that you should not get yourself crushed, they repeat the message twice. On the same sign. Now what's that about?

Meanwhile, at the other end of the lock, where they have (no doubt reluctantly) had to curb their fencing fetish in order that people can actually use the lock there is no sign warning of the (far more real) danger of being knocked into the water by a ghostly moving beam, and the yellow lines demarcating the danger area are already fast wearing away. They're missing a real scary sign opportunity there. Quick! Someone tell them!
Posted by Sarah at 23:54