Bridge of Sighs and size of bridge 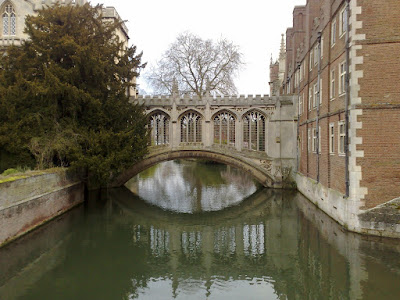 What a super day we had yesterday. A late start saw us waking to drizzle (again) but undaunted we set off to meet Amy for a spot of charity shopping. We visited at least seven different charity shops, randing from the very chi-chi and expensive, to the wonderfully down to earth Salvation Army one. I succumbed to a new bag, with rather nice embroidery and a pair of what will be forever known as my Cambridge Pixie shoes, in lovely soft green leather and with the suspicion of a pointy toe. Very Cambridge.

We took a break half way through for lunch, and afterwards met up with James, who had been to Ely on a wild goose chase after a tin of Hammerite primer that Jim had seen in the pound shop but that wasn't there when he got there.. Sorry James.

Having done Commerce, the late afternoon was devoted to Culture and Amy and James took us on an unofficial tour of the University taking in the splendid University Library and some of the colleges, including their own (Clare and Selwyn), and St Johns, which we had a particular reason for needing to visit.

Where we are moored now, below Jesus Lock, is the normal limit of navigation, but the head of navigation is a little further upriver. Between April and September, powered craft aren't allowed beyond Jesus Lock because the river is thick with punts, but outside that season, it is possible, with permission, to take a boat through. The other problem is that there are some pretty low bridges (exceptionally pretty in fact), but James reckons that Warrior's low profile is perfectly suited to a trip along the Backs and up to the Mill Pond, so we went to have a look at the lowest bridge, the charmingly named St Johns Kitchen Bridge - which was best viewed from the Bridge of Sighs - a copy of Venice's famous landmark. Jim reckons it'll be fine! Having been on our feet for the best part of the day - it was by now nearly seven, and we must have walked miles - we made our way back to the boats having agreed to meet up at eight at the Fort St George, before going on to Cambridge's newest and most wonderful (and that's against some stiff competition) real ale pub. So, a quick dinner of sardines on toast, get the fire going for later and to dry my boots, slip into a clean t-shirt and my new shoes, and off out again, to see not only J&A but also the legendary Big James and Emma from Kestrel, for a quick pint before pressing on again.

Another long walk brought us to the Devonshire Arms, recently reopened in an entirely new incarnation by new owners the (local) Milton Brewery. The bar staff were wonderfully knowledgeable and enthusiastic about the beers (and cider) they sold, and it was all fantastic - just what I like beer to be (northerners look away now) crisp and clear with no head at all, definitely not fizzy, but not flat either, but a sharp, cleansing liveliness; glass filled to the brim, and no trace of foam or scum clinging to the sides on the way down. I started with the hoppy, golden Icarus, which was lovely, and then tried the Pegasus champion best bitter - which was also great. Jim stuck to the Nero stout which even I - not a lover of dark beers - could tell was lovely (but I couldn't eat a whole one). We also tried to convert Amy with the lighter Tiki, which for a not-so-strong (3.8%) beer had masses of flavour. And finally we shared a half of the 8.8% Caligula, smooth and sweet and scarily drinkable, although fortunately for me not quite my cup of tea. I fought Jim for the finishing of it though, and won. 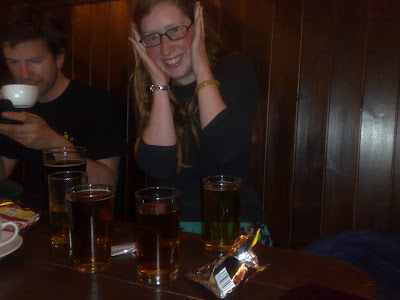 Amy falls amongst real ale drinkers
And then - last orders being at midnight - we finally made our way back through Cambridge's deserted midnight streets to the river, and bed, where we slept the sleep of the virtuous who have spent the day in wholesome exercise... and awoke this morning to bright sunshine and the prospect of a pleasant trip back to Ely later.
Posted by Sarah at 10:29