Got a couple of busy days at work coming up so I thought I would just post a couple of interesting pics to tide things over. First one I came to was this - Chertsey's engine room cabin top (is it still a cabin top when it's lying on the ground? Or merely a potential one?) 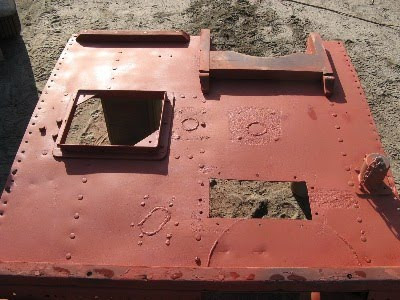 Anyway, with all the old paint removed and just a couple of coats of primer you can see all the scars I wrote about the other day. That semi circle at the front is where there used to be a slide, mirroring the one on the other side. That had to be welded up when the air cooled engine was fitted, to make the space for the engine breather. That's the rectangular hole that cuts into the semi circle. To the right of that is the current exhaust outlet - but look at how many welded up redundant ones there are. You can see both where the hole has been welded up, and the corrosion that has occurred under the flange. But what is that oval hole to the left of the breather vent, that doesn't have a distinctive flange mark? And that square of corrosion to the right that doesn't have a hole?

The handrails and runners for the remaining slide are wooden, and still reasonably serviceable. Finally, the vent where the pigeon box should go - but this is now a square one, with a non-opening lid with a porthole - more like a josher's 'biscuit tin' but bolted down. That appears to be a relatively recent addition, all the older photos I have showing a more conventional pigeon box.
Posted by Sarah at 07:34