Bright as new paint (and wet too)

We had a lovely day yesterday in Little Venice, at the Cavalcade. Among other delights we saw three boats - two of them former working boats - in their magnificent new paint schemes, and how many photos did I take? A grand total of one. Pathetic isn't it, so overwhelmed was I by the sight of Baldock resplendent in Willow Wren livery, and Victoria - finished only last week - absolutely glorious in Associated Canal Carriers colours that I just stood and gawped rather than getting the camera out. Sorry. But here's the one: 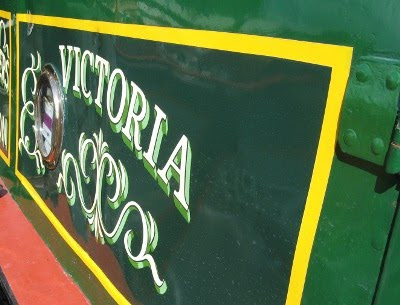 Aside from that failing on my part, and a rather unpleasant lunch (of which more later) it was a splendid day out, up to and including the final downpour that accompanied us on our way back to Paddington.

We were delighted to meet and spend much of the day with Carrie (Blackbird), Simon (Tortoise) and Neil and Kath (Herbie), fellow bloggers and all lovely people. We found the beer tent (and somehow seemed to have trouble shaking it off...) and sat for a long while watching the world go by, including waving to Mike as he steered Prince Regent past us.

Then I went off to collect Chertsey's new (indeed, only) stove chimney, very handsome and handmade, which I proceeded to carry around like a (rather shiny and cylindrical) baby for the rest of the afternoon. We went back for a tour of Tortoise, then back down to the visitor moorings to see Herbie's fantastic new paintwork and have a cup of tea, and then, as we were on the verge of leaving, were persuaded to return to Tortoise for a curry cooked by Simon, which was really lovely.

Now, Simon and Carrie are both vegans, as I used (briefly) to be and know in my heart that I really should be. Having been moved from being (lacto-)vegetarian to being vegan, and then having lapsed from that, I never really went back to being veggie; as far as I'm concerned there's no real moral or practical difference between using animals for meat, milk or eggs - in the latter cases the exploitation and environmental damage is probably actually more protracted. A work friend of mine has a friend who rears organic pigs; she says, 'the way I look at it, they have one bad day in their entire lives' - whereas for an intensively reared chicken or an industrialised dairy cow, every day is pretty miserable. So while I mainly ate a veggie diet, I didn't define myself by it, and didn't feel too bad about consuming the odd bit of meat. It was, however, always something of a disappointment (except for the very expensive organic dry cured bacon, mmmm). So it was pretty bad luck, or bad judgement, on my part that they should find me in the queue for the 'hog roast', having briefly quelled my conscience and an even stronger sense of self-preservation. However, the £5 bap filled with a few bits of stringy meat and a large quantity of very soggy flavourless 'stuffing' was punishment enough, and it wasn't held against me. I am however inspired to get back on the vegan path again (after all, it does make not having a fridge so much less of a pain) and make a bit more of an effort. Especially if Carrie will give me the recipe for that absolutely lovely banana cake.....
Posted by Sarah at 10:30