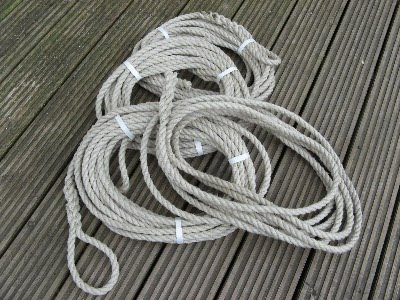 It's spend, spend, spend now (well, until the money runs out). I've just taken delivery now of some ropes (sorry, lines) for Chertsey. Or some rope in the form of lines, perhaps.

I decided to get Hempex, as that is what we have on Warrior and I have been very pleased with it. It looks good, it's long lasting, and it's comfortable to hold and use. We bought Warrior's at Crick, three or four years ago, and we had it in our minds that it was 14mm, so that's what I ordered this time. Unfortunately, it turns out that what has come isn't quite 14mm, but 1/2 inch, and it looks quite a lot thinner than Warrior's - although I suppose it may get fatter looking with age. Anyway, I think I will stick with with it for now, especially as it is in lengths, already spliced (yes, I know, I really must learn to do it myself).

What lengths of rope you should have, for handling and tying up, seems to be a matter of some controversy. Based on my experience on Warrior and Tarporley, I've gone for four interchangeable 10m lengths; one for the front, one for tying up the stern, one for the back end and one for spare - which can be joined to one of the others if I ever need a longer one. 10m might seem a bit long for tying up, but I'm working on the basis that it's easier than faffing about with separate ropes for that, and sometimes I'm not going to be able to get close into the bank. Also it's good to be able to take the rope back to the boat after tying it off, and when using a ring I like to just put a loop through rather than the whole length of the rope as it makes casting off from the boat so much easier. Ideally, I'd probably even have liked them a bit longer, but that might just be me. Only experience will tell me if I've got it right.

By the way, a quick update and a good word for Trafalgar Marine, who we ordered it from. Jim rang them up about it and they were very helpful, including offering to take it back. The guy checked and agreed that it wasn't 14mm, and said that they would send the whole lot of their remaining stock back to their suppliers. Meanwhile I've decided that it looks fine from a distance, and as it was a special offer I'm sticking with it.
Posted by Sarah at 12:57